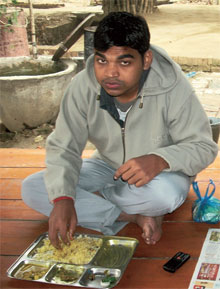 IF YOU are one of those people whose meal is not complete without a generous helping of rice, you should check where it is coming from. Rice grown in fields irrigated by arsenic-contaminated water can have the toxin in it. A study has shown that this could lead to enough arsenic accumulation in staple rice eaters to cause genetic damage. However, monitoring water for arsenic, changing irrigation regimes and using arsenic-tolerant rice varieties can remedy the situation.

Arsenic toxicity has been linked to a host of cancers, and skin and vascular diseases. The joint-study, by scientists from the CSIRIndian Institute of Chemical Biology in Kolkata and the University of Manchester in the UK, has now established that arsenic has a toxic effect on human genetic material, a phenomenon known as genotoxicity.

For their study, published on July 22 in Scientific Reports, the researchers examined cells from urine samples taken from 400 staple rice eaters from rural West Bengal. All participants consumed rice grown in their own or neighbouring fields. To ensure that arsenic in the participants came only from rice, the group tested the drinking water consistently used by participants and included only those individuals in the study who were using arsenic free drinking water. “Most people are aware of arsenic contamination, and so are careful about their drinking water. However, they don’t test the groundwater (used for irrigation) for arsenic, which is what gets into rice,” says Ashok Kumar Giri, the senior author.

A sensitive assay for genotoxicity, called the micronucleus assay, was used for the study. Micronuclei are tiny bits of chromosomal fragments which include DNA, enclosed by a membrane, which form when toxins like arsenic interfere with cell division.

The results showed that the number of micronuclei increased with the concentration of arsenic in cooked rice. Among a range of arsenic concentrations tested, 200 parts per billion (ppb) emerged as the limit above which there was significant arsenic-related genotoxicity. People consuming rice with 200 ppb or more arsenic were found to have at least three micronuclei per 1000 cells, irrespective of age, gender and tobacco habits.

The study recorded over 300 ppb of arsenic in cooked rice in some areas. This could be a public health concern because in these areas only rice-borne arsenic is enough to cause genotoxic effects on staple rice eaters.

Mitigation measures
“We tested the soil and ground water at different depths in these areas, and found significant levels of arsenic in several water sources. The arsenic in rice comes from these sources,” says Giri. Forty per cent of cooked rice samples collected from highly arsenic-affected areas in West Bengal had more than 200 ppb of arsenic. In areas with less arsenic in its waters, just 2 per cent of rice had arsenic. “This indicates cultivating rice in less contaminated water is one mitigation strategy to reduce arsenic content in rice,” he says.

Another possible mitigation strategy is to use arsenicresistant rice varieties. “Arsenic enters rice through gateways in the roots meant for nutrients like phosphorus and silica, which are essential for rice growth. It is impossible for the rice to selectively uptake only what it wants, says Shekhar Mallick from the National Botanical Research Institute, Lucknow. “But different rice varieties have different abilities to restrict arsenic uptake. We have been working on rice strains that can tolerate high levels of arsenic.”

Even if rice does contain arsenic, a little care in the kitchen can help reduce the toxin content in cooked rice to some extent. Using arsenic free water to wash rice, and cooking rice in excessive water in the order of 1:6 rice to water ratio can help reduce arsenic by about half.