Instead of curtailing use of plastics, the Delhi government sets up a new market 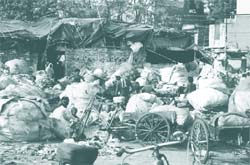 at a time when many countries worldwide are phasing out use of plastics or cracking down on its trade, the Delhi Development Authority ( dda ) has 'inaugurated' a poly vinyl chloride ( pvc) market at Tigri Kalan village in west Delhi. Spread over 10 hectares of land, the market is to provide trading grounds to those affected by the infamous 1995 fire at Jwalapuri in west Delhi.

In the 1980s, when sale of plastics shot up in Delhi and other cities, a market came up along the Tank Road, also in west Delhi. It then moved to Punjabi Bagh, where protests by local residents forced the traders to shift base to Jwalapuri. But the 1995 fire gutted down 4,000 godowns and affected more than 50,000 workers. Now Tigri Kalan is the tinderbox. Certainly, lessons from the catastrophe have gone unlearnt.

The inauguration of the market epitomises government failure in understanding toxics and the lack of political will for doing something about it. "The trade is a dirty one. Because the government does not wish to face the problem, it has come up with this end-of-the-pipe solution," says Sunita Dubey, researcher, Toxic Link, a Delhi-based non-governmental organisation.

pvc is toxic throughout its life-cycle. During production, it leads to the formation of two highly toxic, hormone-disrupting chemicals, such as phthalates and dioxins. Phthalates can lead to decline in sperm count, cancers of bladder, breast and testicles, suppression of the immune system and reproductive disorders. Dioxins can lead to endocrine disruption, birth defects, decreased fertility, immunity suppression and reproductive disorders.

Many studies show that workers engaged in moulding, grinding and polishing pvc have high incidence of testicular cancer. Even incidence of skin diseases is reported very high.

dda is of the view that by setting up a separate pvc market, they are streamlining the informal sector. It fails to understand that it is only rich traders who sit in the shops. The new market will not bring about any change in the status of ragpickers. The establishment of the new pvc market shows government apathy towards public health and environmental safety.

Rather than promoting the use of plastics, particularly pvc , the government should think in terms of phasing out use of the non-biodegradable commodity. It is already being phased out in countries such as Austria and Switzerland.