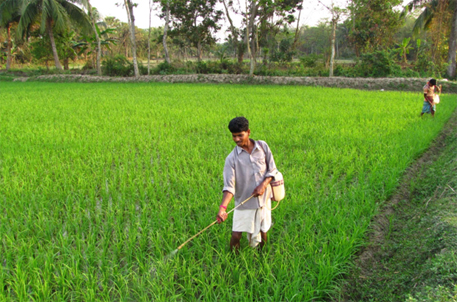 An average Bengali meal is incomplete without fish, many of which are local varieties not found or grown outside West Bengal. But these indigenous breeds that thrive in paddy fields of the flood plains of South Bengal are now dwindling due to overuse of pesticides, finds a new study.

Funded by the West Bengal Pollution Control Board (WBPCB) and titled “A study of synthetic chemical inputs in cultivation and its impacts on the local environment, biodiversity and human health in West Bengal” its preliminary results offer insightful evidence.

The study found that farmers tend to use pesticides and chemical fertilisers in higher proportion in the short duration Boro (local name for Rabi crop) paddy cultivated between December and April than the main Kharif paddy cultivated between July and November. “The reason is Kharif is a rain-fed traditional crop while Rabi is an intensive crop using irrigation, mechanised implements like tractors and more pesticides,” says Silanjan Bhattacharyya, lead investigator and a faculty at the West Bengal State University. Interestingly, in locations where farmers used the maximum chemical inputs during the Rabi crop, also saw the highest usage of chemical inputs during Kharif. “This probably explains how intensive cultivation influences even the traditional farm practices,” adds Bhattacharyya.

The average pesticide input in southern Bengal paddy fields is 982.38 gm/ha in a cropping year, the range being 0 (in tribal cultivated plots in Purulia district where they cannot afford it) to 2414.28 gm/ha (in Danton block of West Midnapore district, a comparatively prosperous area).The Indian average is 500 gm/ha as in 2009.

The research selected six locations and classified them in terms of use of chemical inputs—very less, moderate and maximum—and tracked 480 farm plots between 2009 and 2011. Ninety-four brands of pesticides (belonging to 34 chemical groups) were documented during the study: 65 among them insecticides, 26 fungicides and three herbicides. Of the 94 varieties of pesticides, 12 were banned by the European Union; in India only one was banned from use while four were in the restricted category. Banned pesticides constituted 20.46 per cent of total pesticide inputs which include endosulfan prominently especially in 24 Parganas and Nadia districts.

Improper use of pesticides

All farmers were found to be influenced by local dealers to use pesticides, not agricultural extension offices or media like television and radio. While each pesticide has a particular target and dose prescribed by the manufacturer, the study reported target wise mismatch and overuse. “The result is quite surprising as we have found that all the mismatch decisions taken by farmers were influenced by the local pesticide dealers. Maximum mismatch records are from Budge Budge region as most of the farmers are influenced to kill earthworms and crabs, naturally inhabiting in crop fields, using Cypermethrin 10% E.C., which is originally an insecticide as prescribed by manufacturing company,” the report notes. While none of the farmers applied pesticides in the correct dose, in 43 per cent cases farmers used an overdose of pesticides by 1.5 to up to 20 times the prescribed dose.

In one of the study locations, Adra in Purulia district, where farmers use very little chemical fertiliser and almost no pesticide, highest usage of organic fertilisers, 3,876 kg/ha of cow dung manure, compared to 803 kg/ha for Danton which used the maximum amount of chemical inputs was found.

In terms of faunal diversity, the encounter rate or incidence of insects were lowest in locations using the highest amount of pesticide. On the flip side, use of pesticide not only killed insects but also beneficial predators like damsel fly and spiders which feed on pests. While Danton in West Midnapore district with maximum pesticide use recorded 76 bird species, 108 species were recorded in Budge Budge of south 24 Parganas district using very low pesticide.

“We found 39 varieties of indigenous fish in the crop fields of south Bengal, especially during the monsoon, but the numbers are reducing drastically due to rapid use of synthetic chemicals,” tells Soumya Sarkar, project assistant and doctoral student associated with the study. “To eat the vegetables and fish from the crop fields is risky due to pesticide residues,” adds Bhattacharyya. The study has been submitted to the WBPCB for review.