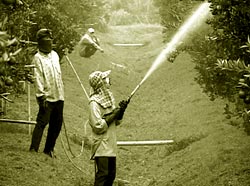 Pesticides, problems associated with their use, alternatives and what comes in the way of these alternatives: these are the major issues dealt with in the film Orange Alert. A number of documentaries have been made on the subject but the essence remains the same. If anything changes at all, it is the location. Today, when industrialised nations are coming up with newer, stricter norms against these chemicals, the scene has shifted to developing countries. These countries stare pesticide contamination in the face, but are not geared to regulate these toxic chemicals. An example is Chiang Mai province in northern Thailand, the backdrop of this film.

Grandpa Yuen of Nong Bua Ngam village in the Mae Ai district suffers from a number of ailments -- dizziness, headache and skin lesions. Reason: pesticides used in the orange orchards, not too far away from the village. The kindergarten teacher complains that everyday five to six children suffer from diarrhoea. Many of them also have skin lesions. Pesticides are poisoning an entire village, but how?

The filmmaker does include the explanation in the narrative, but the answer is evident from the visuals. Nong Bua Ngam is surrounded by orange orchards, located on the slopes. Pesticides sprayed on oranges run down, contaminate the water sources in the village and even sneak their way into the food chain, at all levels.

But when did it all start? Around 1999. Orange orchards had been popularised two years earlier to this, courtesy government schemes that provided various incentives to farmers to help them make a shift from rice and cassava to fruit orchards. And today, there are about 40,000 reported cases of pesticides poisoning each year. And an equal number, or perhaps even more, go unreported.

The scene shifts to Mae Tha sub-district in Chiang Mai. Farmer Phanomkorn Namchan does not use pesticides. He stopped using them in 1995 after facing serious health problems. He is one of the members of the Chiang Mai Organic Producers Association. All farmers are joint shareholders and sell their produce in the nearby towns and cities. "There is an ever growing demand for organic crops. It is good for my family, environment and for the consumers," says Namchan. "But the government is not doing much to promote this kind of agriculture," he adds.

Apart from pesticides that are manufactured at home, Thailand exports about 39,000 tonnes of active pesticide ingredients each year. More than 36 kinds of pesticides are sprayed in orange plantations alone; over 60 per cent of these are classified as extremely and highly hazardous by the World Health Organization.

Will these sprays ever stop? The fight is difficult. And the filmmaker acknowledges this at the end: "The nexus of powerful orchard owners, government officials and other vested interests made shooting this film and accessing information very difficult".