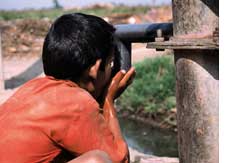 a study conducted to find the effects of pollution on the Taj Mahal has noted that Agra's groundwater could have carcinogenic contaminants. Polycyclic aromatic hydrocarbons (pahs), the contaminants in question, are by-products of a variety of processes ranging from volcanic eruptions, formation of coal to lighting a cigarette or paving a road.

More than 30 pah compounds and several 100 pah derivatives are known to have carcinogenic and mutagenic effects, making them the single largest class of chemical carcinogens known. The Agra study found that the city's groundwater had 13 pah varieties, the more toxic ones making up 65 per cent of the total.

The study was conducted by researchers from the School of Chemical Sciences, St. Johns College, Agra. Amit Masih, the lead researcher, says, "It's sad that India has no standards or limits on release of pahs which may quite possibly be carcinogenic." It is one of the few studies on groundwater contamination and is published in the International Journal of Water (Vol 4, Nos 1/2).

Sixty samples were collected with the help of submersible pumps from 12 stations situated at six places in the city. "There are thousands of pahs, we only looked for 22 and found 13. If we had looked for more we might have found more" says Ajay Taneja, co-author of the paper.

Masih says the pahs were well within who limits for individual concentration of pah: 1-10 nanogram per litre. But Taneja is more uneasy "Even the fact that they are present in trace amount is a problem."

Prahlad K Seth, ceo of Biotechnology Park in Lucknow and former director of Indian Institute of Toxicology and Research, points out another problem. "The likelihood of hydrocarbons being taken up by aquatic organismsand fish and subsequently entering the human body is not ruled out," he says.

There are other worries as well. Studies have shown that most pahs stick to suspended particles, and consequently accumulate in the sediments and degrade fairly slowly. So they pose as a long term source of pollution.