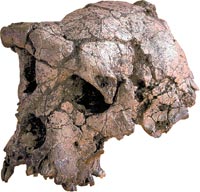 A seven-million-year-old nearly complete skull of the earliest human ancestor yet found was unearthed by anthropologists in the desert of northern Chad. The discovery has set back the origin of human race by one million years. As the attempt offers the first opportunity to study a human fossil from the time when humans and apes descended from a common ancestor, scientists are terming it as a major breakthrough in the study of human prehistory.

The team which made the discovery has named the new fossil Toumai. It showed a unique mosaic of ape-like and human characteristics. Its brain measured between 320 and 380 cubic centimetres, which is comparable to that of a chimpanzee. Its tooth enamel was thicker than a chimpanzee's, indicating it did not survive on fruits alone. Toumai's snout did not protrude like that of a chimp and its canine tooth was much shorter than apes.

Scientists said that the blend of characteristics do not fit in any evolutionary tree devised till now. The team noted that while it will never be possible to know precisely where or when humans originated, the new discovery challenges accepted theories about where human ancestors came from.