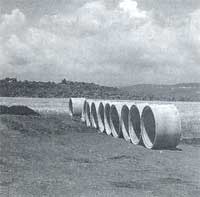 The Konkan Railway Corp (KRC) was caught off guard when the Karnataka agriculture minister, H M Revanna, chose to let loose a tirade against the project. The state government has always come out in the support of the project, dismissing the apprehensions raised by environmentalists about problematic ecological consequences.

Speaking at a press conference in Bangalore on July 19, Revanna alleged that unprecedented floods in the western districts of the state this year were due "to the faulty construction of the tracks of the Konkan railway line". He explained that the rail embankments have obstructed the natural drainage in several areas. Consequently, large stretches of land beside the railway tracks became flooded overnight when this year's monsoons hit the state. "The tracks turned into dams by preventing the flow of water," Revanna said.

The problem has been particularly severe in the Dakshina Kannada district. The minister has promised to have the problem redressed by the KRC. District officials have already urged the state government to press for the construction of vents under the tracks to allow for the free flow of water.