Dispute between US and EU set to hot up in WTO 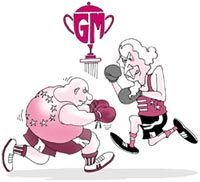 Proceedings in one of the most controversial disputes at the World Trade Organization (wto) have got underway. The matter deals with a "de facto" moratorium placed by the eu on approving genetically modified (gm) products. Initiated by the us, the case is being followed with close interest not just by other wto members, but also civil society observers. This is because its outcome could have a significant bearing on the future development of environmental, social and health aspects of trade policies. On June 2, a dispute settlement panel of the wto, which is entrusted with investigating eu's "protectionist" measures, held its first hearing. Interestingly, some groups have even filed amicus curiae briefs with the panel in a bid to influence the outcome.

Four and a half years after the restrictions came into place in October 1998, the us brought the issue to the wto on May 13, 2003. It sought consultations with the eu on the matter. Canada and Argentina, too, filed separate requests. All the three complainants alleged that the eu had erected an unjustified trade barrier that violated several wto agreements. Having failed to achieve a breakthrough, the us, Canada and Argentina requested the wto's Dispute Settlement Body to constitute a panel to investigate the eu's measures. Their plea was accepted on August 29, 2003.
The us made its first submission to the panel on April 21, 2004, challenging the moratorium under the wto Agreement on the Application of Sanitary and Phytosanitary Measures (sps). Earlier, it had also cited the Agreement on Technical Barriers to Trade (tbt) to buttress its argument. While the us did not reiterate this point in its April 21 submission, it reserved the right to do so if the eu were to claim that its moves did not fall within the scope of the sps pact.

Indeed on May 17 this year, the eu contended that the issue was too complex to be covered by the sps agreement alone, and that some aspects fell within the purview of the tbt pact as well as the 1994 General Agreement on Tariffs and Trade (gatt). More importantly, it stated that issues of environmental risks, certain health hazards and the conservation of biodiversity were best regulated by the Cartagena Protocol on Biosafety. The eu called upon the panel to interpret agreements "against the background of relevant norms in international law" outside the wto.
A highlight of the us April 21 submission was the ostensible impact the eu ban was having on developing countries. It argued that apart from blocking developing country exports of biotech crops, the eu ban had also led African countries like Zambia, Zimbabwe and Mozambique to reject us food aid in 2002. This, it asserted, came in the way of developing countries' ability to take advantage of the biotech research activities addressing agronomic and nutritional issues of concern to them.

A group of 15 public interest organisations, which filed an amicus curiae brief with the panel on May 27, 2004, did not buy the us argument. In their brief, they argued that the benefits of the technology of genetic modification were meant to serve the interests of only large farmers in industrialised countries and multinational firms that retain monopoly control of seeds.
The us argued that the ban was not based on a "risk assessment", as envisaged in the sps agreement, or on scientific principles. Rebutting this allegation, the eu stated that its measures were based on the precautionary principle pending a full assessment in the eu.

The us' claims were also opposed by an international team of scholars from the us and the uk in an amicus curiae brief they filed with the panel on April 30, 2004. They rejected the us view that risk assessment was conventionally understood as a factually grounded, value-free analysis requiring precise identification of possible harms to human health and the environment. The team pointed out that variable degrees of maturity of scientific knowledge base, and scientific and cultural contingencies in national contexts invariably influence risk assessments.

Another allegation levelled by the us is that the eu is causing delay. The latter counters this charge on the ground that the information it sought is essential. And, according to it, gathering these inputs is a time-consuming process.

In the coming weeks, both the eu and the us are expected to up the ante.