How fields of different GM crops are spaced may be crucial to their survival, 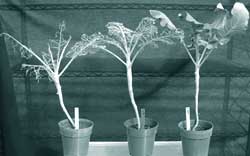 transgenic crops may be more vulnerable to pests than believed. If plants carrying one foreign insecticidal gene are grown next to those with two such genes, insects can rapidly develop resistance to both, according to a study by scientists at Cornell University in the us.

The scientists studied plants containing genes taken from Bacillus thuringiensis (bt), a soil bacterium. The same genes are used in the genetically modified (gm) bt cotton that is commercially grown in India. Besides cotton, only one other gm crop uses the same bt genes and that is maize. bt genes produce toxins that are deadly to insects but harmless to humans. "Our findings suggest concurrent use of single- and dual-gene bt plants can put the latter at risk if planted in the same area," said Anthony Shelton, professor of entomology at Cornell's College of Agriculture and Life Sciences in a study published in the Proceedings of the National Academy of Sciences (June 14, Vol 102, No 24).

The findings may have far-reaching implications for gm regulatory and management practices in countries where such crops are cultivated. These countries as yet do not bar farmers from growing different gm varieties side by side. The only distinction they make is between gm and non-gm crops. "Our data indicate that it would be appropriate for the government to consider de-registering single-gene plants soon after dual-gene plants are available," Shelton told Down To Earth .

Global gm seeds giants, such as Monsanto, have been developing gm varieties with one or more foreign genes, also called transgenes. Of late, the emphasis has been on using more than one transgene for greater resistance to pests. India plants only single-gene bt cotton crops, but dual-gene varieties are in the pipeline.

bt crops were commercialised in 1996 and in India about three years ago. Since then, scientists and anti-gm activists have been expressing concern that widespread use of bt crops would enable insects to develop resistance to the toxins. Though resistance has not yet been reported from the field, earlier lab studies have shown that over time, several pests can reduce their susceptibility to gm toxins. For instance, scientists led by G T Gujar at the Indian Agricultural Research Institute in Delhi showed last year that over six generations, the larvae of Helicoverpa armigera -- a rampant cotton pest commonly known as American bollworm -- develop resistance to one of the bt genes, Cry1Ac (See: 'A Pest Overrides B t', Down To Earth, April 15, 2004).

But the Cornell study shows for the first time that dual-gene gm crops can also be vulnerable. "Single-gene plants really function as a stepping-stone (for pests) in developing resistance to two-gene plants if the single-gene plants contain one of the same bt proteins as in the two-gene plants," says Shelton. Asked what would be a safe distance between two such crops, he said, "It would depend on insect movement and the topography."

The scientists carried out their experiments in a research station in New York, using three types of gm broccoli plants: two types each expressed a different bt toxin (Cry1Ac and Cry1c) and a third -- what scientists call a pyramided plant -- expressed both toxins.

Subsequently, the researchers bred diamondback moth (Plutella xylostella) populations in which only some of the insects were resistant to a single b t toxin. These insects were then released into cages where either single-gene plants, dual-gene plants or mixed populations of the plants were grown.

The scientists found two years and 26 generations later, the insects damaged all single-gene and dual-gene plants housed together. But over the same period, almost all the insects exposed only to pyramided plants died. "It's easier for an insect to develop resistance to a single toxin," said Shelton, adding, "If an insect gets a jump on one toxin, then it becomes more rapidly resistant to that same toxin in a dual-gene plant, putting more pressure on the second toxin in a pyramided plant to control the insect."