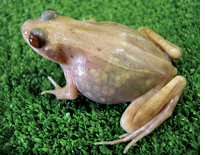 Botany students might soon have a revealing amphibian in their labs. Masayuki Sumida, a professor at the Institute for Amphibian Biology at Japan's Hiroshima University, has bred a diaphanous frog. "You can watch its organs without dissection," Sumida told the news agency Agence France-Presse.

Dissecting animals for science has sparked controversy globally, prompting some companies to create computer simulations as cruelty-free alternatives. Sumida says the transparent frog is the result of breeding two specimens of Japanese brown frog (Rana japonica) that had a genetic mutation giving them pale skin. By selectively breeding their offspring, researchers created the transparent frog. Most of the world's known transparent creatures live underwater, and transparent four-legged animals are extremely rare.

Though not yet patented, the frog is the first four-legged, see-through animal to be bred by scientists. But only one in 16 frogs end up see-through, and Sumida has not yet figured out how to pass on transparent traits to offspring.