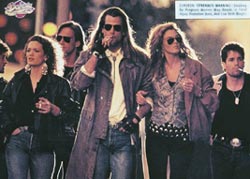 Philip Morris (pm) and rj Reynolds (rjr) believe that socially disadvantaged young women, particularly those who haven't studied beyond high school, do not necessarily desire a "feminine" cigarette brand. The three writers of 'Smoking, social class, and gender: what can public health learn from the tobacco industry about disparities in smoking?' claimed this after studying internal tobacco industry papers available online and epidemiological data on smoking rates. rjr in 1988 began Project Virile Female (vf), which was to wean away young women from pm's cigarette brand, Marlboro. Project vf launched a new brand called Dakota for an "18-24 year old female who...(has) a high school education or less and generally has an unskilled job. She is not professionally ambitious...her aspirations are very short term."

Dakota failed during test marketing, but the researchers say it shows the tobacco industry is targeting the working class. rjr's rival pm too found that "...smoking among females has increased among those who have not graduated from high school and remained about the same among high school graduates."

Over the last century, the tobacco industry touted cigarettes as ''torches of freedom'' symbolising emancipation from male domination, and as vehicles for attracting men. The new spin is to use male imagery that appeals to the ''virile'' and ''maverick'' young woman.