US scientists have developed a device that can capture air pollutants 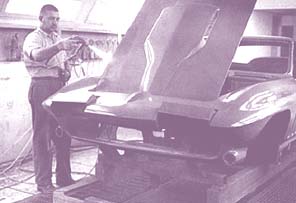 a device for capturing and recovering dilute volatile organic compounds and other hazardous air pollutants has been developed by researchers at the University of Illinois, usa . "The new vapour-recovery system is fast, convenient and can achieve new levels of air quality control," says Mark Rood, a professor of civil and environmental engineering at the university. "The device uses activated-carbon-fibre cloth and electrical energy to collect and efficiently recover air pollutants that are emitted into the atmosphere from the use of materials such as paint solvents and cleaning solutions."

The carbon-fibre cloth has nearly twice the adsorption capacity of activated-carbon granules at low concentrations and has a woven structure that allows the adsorbent to be pliable and electrically conductive for electrothermal desorption. Electricity flows through the carbon cloth causing heating, while allowing for efficient recovery and reuse of the captured pollutants. "The vapour-recovery system could be used to control the emissions from large paint booths, for example, including the hangar-sized units used to paint entire aircraft," said Patrick Sullivan, a civilian employee at the us Air Force Research Laboratory.

"The exhaust from the booth would be blown through an adsorption bed containing a number of cylindrical cartridges of activated-carbon-fibre cloth, which would trap the solvent." To release the solvent, an electric current passes through the fabric, allowing for rapid heating, Sullivan said. "The solvent boils off the fabric, condenses on the inside of the chamber and drains into a collection vessel for recovery and reuse."

Because electrothermal desorption does not require an adsorbent drying step, the regeneration process can be faster and more energy efficient than conventional desorption techniques used with activated-carbon granules, Rood said. "We can treat very dilute gas streams and provide a pure liquid effluent with this new device." The electrothermal process also allows for desorption and condensation of a volatile organic compound without contaminating the water -- which would require a costly and complex distillation process for water-soluble solvents. The current bench-scale device is slightly larger than a football and uses as much power as a hair dryer. Industrial units would start at the size of large filing cabinets, Sullivan said. The carbon-cloth cartridges have been regenerated over 100 times without degradation to the cloth.

The collaborators on the project include K James Hay at the us Army Construction Engineering Research Laboratory, Joseph Wander at the us Air Force, and graduate students David Ramirez and Katherine Dombroski at the university A large-scale experiment is being planned with chemical engineer Massoud Rostam-Abadi at the Illinois State Geological Survey, usa . The researchers have now applied for a patent.