Travel mystery of a turtle

THE number of loggerheads, the world’s largest hard-shelled turtle, is declining in its most important nesting site. Marine scientists at the Archie Carr National Wildlife Refuge in Florida say the turtle’s nests at the site have declined by 16 per cent between 1998 and 2011 (see graph). This is baffling as the numbers of other turtle species like the leatherback and the green turtle are on the rise at the refuge.

Researchers have solved the puzzle using isotope analysis. They say the foraging area of loggerheads is far more extensive that thought and many of them get hunted in the Bahamas. 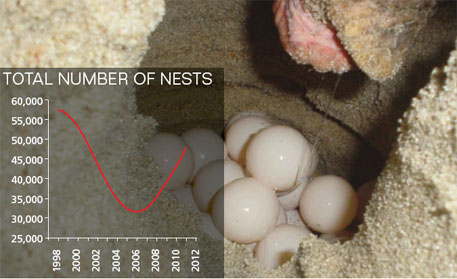 For the experiment, 14 females were tagged with satellite tracking devices and released. Once they returned to nest in the refuge, the researchers tested their blood for carbon and nitrogen isotopes. The isotopes indicated the type of food the turtles consumed, and accordingly, the regions they swam in. The tests showed that the endangered turtles swam across a much wider range than thought—up to Virginia and Delaware and the Great Bahamas Bank. Satellite tags allowed the researchers to validate their findings. “Identifying foraging areas of nesting females is important to protect the species,” says Simona Ceriani of the University of Central Florida, who led the study.

It is the first time that isotope analysis has been used to understand the movement pattern of these turtles. “Isotope analysis is a much cheaper method than satellite tracking to understand the habits of these turtles,” says Ceriani. The co-author of the study, Daniel Evans of the Sea Turtle Conservancy in Florida, says the loggerheads get hunted for food in the Bahamas, despite a ban. The study was published in PLoS ONE on September 20, 2012.

V Ramaswami, a marine geologist at the National Institute of Oceanography in Goa, says such studies might not work for studying the habits of loggerhead turtles in oceans around the Indian sub-continent. “The concentration of isotopes in food sources keeps varying with temperature. In this study, these variations are large. But in the Arabian Sea and Bay of Bengal, they are much smaller,” he says.