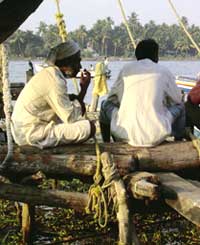 on june 15, 2006, a 45-day monsoon-trawling ban was imposed in Kerala's coastal waters for the 19th year in succession.

There is mixed reaction on different fronts. Traditional fisherfolk together with the scientific community are in favour of the ban even as trawler owners and their workers oppose it.

Trawl-boat owners claim they get their best catch during monsoon and a ban would throw thousands of people working in trawlers and the fish processing centres out of job. There are around 5,000 trawling boats that fish in Kerala's waters and each employs an average of four workers. "How will we live during this one and a half month?" asks Arul Bro, a trawler worker for the last twenty years.

On the other hand, traditional fisherfolk insist on the ban. Mindless trawling in the last few decades has drastically reduced the availability of fish, they contend. "Our life depends on the fish we catch during these three months," says P J Joy, a traditional fisherman. "We live at the mercy of money lenders for the rest of the year," he adds.

Trawling during the monsoon was first banned in the state in 1988 based on the recommendations of the Balakrishnan Nair Committee appointed by the state government to look into the impacts of trawling. The ban aimed to help regenerate marine life along the state's 22 km-wide coastal waters. "It has been scientifically proved that monsoon creates a conducive atmosphere for spawning. Thus, it is crucial to protect the marine habitat during the reproductive period," says B Madhusoodana Kurup, head, department of industrial fisheries, Cochin University of Science and Technology. "The trawl net sweeps the seabed and devastates marine species," he adds.

If this is true, then the ban should also include the kappal vallams -- traditional boats with in-board engines of high horsepower, argue trawl boat owners. But Charles George, president, Kerala Matsya Thozhilali Aikya Vedi, says, "These boats cannot be compared with trawlers as they catch only the surface fish and cannot do bottom trawling." However, scientists point out that kappal vallams too could cause damage.

Meanwhile, the state government has also decided to appoint a committee to study all aspects of fishing in Kerala's coast. But traditional fisherfolk organisations fear the study will be used to favour the trawling lobby.