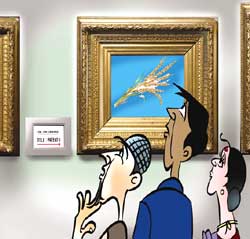 On September 15, 2005 representatives of Syngenta disclosed to Down To Earth the company's plans to patent a few thousand gene sequences of the rice (Oryza sativa) genome. Further investigations revealed that the world's third largest seed company has filed at least 15 applications to secure patents over the rice genome. This is shocking, considering the complete genome sequence of the world's most preferred cereal was made available to everyone for free by the International Rice Genome Sequencing Project (irgsp) -- a consortium of public-funded rice research institutions in China, Japan, usa, B razil, South Korea, Thailand, India and the uk -- just a month before Syngenta's revelation.

Syngenta has submitted its applications to the World Intellectual Property Organization (wipo), the European Patents Office (epo) and the us Patent and Trademark Office (uspto) (see box: Letter for control). Once approved, they could throw the whole world's food economy in complete disarray. As one scientist puts it, "The scope of Syngenta's patent applications is virtually limitless: they cover more than 20 rice varieties found in over 100 countries".

Guy Michel Wolff, Syngenta spokesperson, claims his corporation is not deviating from the practices of companies "which invest in research and development". He also clarified that Syngenta does not seek to own the rice genome. "The patent system won't permit this," he noted. Wolff also hastened to add, " as a socially responsible company, Syngenta has a policy of not applying for patents in developing countries. So our new moves won't affect the interests of these countries".

But experts doubt the Swiss agro-giant's intentions. Says Shalini Bhutani, Asian representative of the Barcelona, Spain-based biodiversity conservation organisation, Grain, "Rice is a small farmers' crop. We can never rely on the fanatically profit-motivated private sector to maintain the genetic diversity of the cereal".

Private agribusiness had shown very little interest in rice-research till the irgsp began in 1997-98. T he ten-year mission seemed to spur on corporates such as Syngenta and Monsanto . In 2000, Monsanto claimed to have sequenced 60 per cent of the rice genome. But the real upheaval happened when, in 2001, representatives of Syngenta's genomic research centre at California, the Torrey Mesa Research Institute (tmri) announced that the institute had sequenced more than 99 per cent of the rice genome.

All this while, irgsp could barely sequence 7.5 per cent of the rice genome. But the project had good reason for such slow progress: it was using the clone-by-clone technique, a slower, costlier but a more effective method than the rapid whole genome approach deployed by Syngenta. The public-funded project would eventually -- in 2005 -- sequence the rice genome with 99.9 per cent precision, as compared to the 99.5 per cent accuracy achieved at Syngenta's tmri lab. The private seed-major's project also mapped rice genes, which did not bear any characters, and so were useless.

But despite inadequacies, Syngenta's draft was important in speeding up irgsp since the latter was mapping 'Nipponbare' -- the same variety of rice used by Syngenta. The seed major, after initial reluctance, agreed to make the draft of its research available to irgsp in 2002. Steven Briggs, head of the genomics unit at Syngenta, gloats: "Humanitarian concerns made us throw open our research to the irgsp". Today, the company tom-toms that this gesture led to the accomplishment of irgsp's mission three years before schedule. irgsp scientists accept the claims have some truth.


Even as Syngenta was polishing its Santa Claus image, the company's lawyers were working overtime to exploit its half-baked research to the hilt. The wipo, epo and uspto grant patents to claimants who file their applications first and the Swiss seed biggie had left no stone unturned to win the rice genome race. But don't patent rules require claimants of gene-related products to identify novel genetic sequences, specify the sequence's product and also list its uses? Yes, they do. But scientists still fear that Syngenta can manage easy approval. Their fear is not unfounded: since rice is the first major plant whose genome has been sequenced, it's very likely that patent offices will have very little knowledge of the cereal's gene-by-gene sequence. This would make it quite easy for Syngenta to misappropriate irgsp's research. One scientist says, on condition of anonymity, that Syngenta can even acquire patents for the useless gene sequences it has mapped. Thus if in future scientists discover uses for these sequences, they would be deprived from patenting them.


Though rice is only one of the 1,182 registered genome projects, it's extremely pertinent for sustainable food security: the cereal feeds approximately 3 billion people or half the world's population. Developing countries produce 95 per cent of the world's rice and more than 60 per cent of rice seeds all over the world are farm-saved. All this makes rice amongst the most coveted in the seed market.

Syngenta has emerged as a major player in this market. The company holds a number of patents in Golden Rice -- a genetically modified rice variety that can mitigate vitamin a deficiency and so, is touted as the panacea for malnutrition in the Third World -- and guards its position in rice-research with hawkish alacrity. The agribusiness biggie was initially quite notorious in using its clout to stop public-funded research in golden rice. But in 2001, Syngenta changed tactics. It entered into a partnership with the public-funded, Manila, Phillipines-based International Rice Research Institute (irri) for further development of golden rice. This act improved its image, significantly, and in 2004 -- The International Year for Rice -- Syngenta was rewarded with a membership of the worldwide consortium, Consultative Group on International Agricultural Research -- the first time that this public-funded body had opened its doors to a profit-making organisation.

Golden Rice is yet to unfold its 'immeasurable benefits', but Syngenta has surely got a toehold in rice research. The company targeted research on the rice genome in a much bigger way. Now if it's armed with patents over the crop's gene sequencing, Syngenta can virtually dictate the course of all rice research.

Though rice is not the staple diet of people in the North, patenting its gene sequences has implications for food security here. This is because rice has major genetic similarities to other species ranging from maize and wheat to bananas. So, scientists fear that if Syngenta has its way, it could rule the world's food economy. Says a worried N K Singh, leader of the Indian group in the irgsp , "Broad patents on rice genes extending to other species will lead to monopolisation of natural genes. Such patents should not be granted". Even corporates such as Monsanto or Pioneer fear that if Syngenta secures the rice genome patent, it would give them a run for their money in the lucrative maize and wheat market.


India is the second largest producer and consumer of rice. Agricultural research institutions in the country have invested more than Rs 50 crore in the irgsp . But senior officials in the Union ministry of agriculture are woefully ignorant on Syngenta's misappropriation of the public-funded research.

Meanwhile, irgsp plans to file patent applications for the genome sequence it has developed. T his is the last hope for the poor millions in India, and elsewhere, who can't afford the branded rice recipe tomorrow.