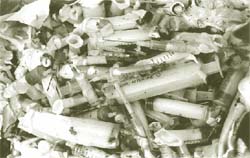 "terrorism of hospital waste on humankind" was how Justice N Venkatachala described the state of untreated infectious hospital waste in India at a workshop on "Hospital Waste Management: Law and Reality" organised by the Society for Environmental Laws and Management in New Delhi on September 6.

Delep Goswami of the Delhi-based Society for Development of Environmental Laws and Management said that there was no place for dumping the 20 tonnes of incinerated infectious medical wastes that Delhi generates everyday. B Sengupta, member secretary, Central Pollution Control Board ( cpcb), said that the overall scenario remained far from satisfactory: thermocouples (temperature measuring devices) were non-functional in most incinerators; most hospitals are still incinerating plastic disposable/bottle wastes and the incinerators were operated by unskilled operators. Sengupta said that emission monitoring conducted by the cpcb at seven hospitals during March-April 1999 revealed that "the particulate matters emitted are 40-50 times higher than the permissible limit in all the hospitals."

The workshop was attended by lawyers, doctors, engineers, representatives from both the Delhi and Central pollution control boards and non-governmental organisations ( ngo s). Speaking on the occasion, Dilip Biswas, Chairperson, cpcb, expressed the need for training the medical staff on how to deal with this problem.