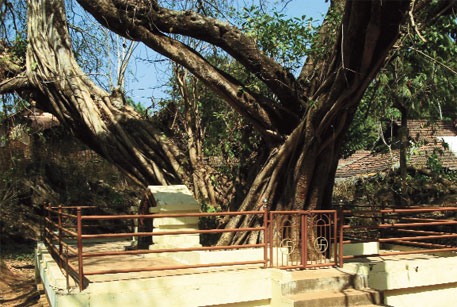 A BANYAN or a peepal tree with a shrine at its base is a common sight across India. These trees are never cut because they are considered sacred. The religious belief may well have played an important role in preserving biodiversity in forest ecosystems. Scientists have now found that the trees have many ecological benefits. They aid in dispersal of seeds and can be a source of natural reforestation.

To analyse these benefits, ecologists from University of Florida, studied 367 fig trees in human inhabited areas in Tirunelveli district of Tamil Nadu. They observed that the trees also considered sacred were frequented by a large number of fruit-eating animals (frugivores) and human disturbance did not deter them from foraging. The Indian flying fox visited these trees in large numbers despite being hunted in the area. A large number of bats visiting the trees surprised the team. “Bats may be visiting human-inhabited areas regardless of risks because of greater food sources available in yards, orchards and near temples, relative to the uninhabited areas,” the ecologists say in the study published in the March 25 issue of Current Science. 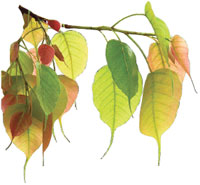 The team thus inferred that abundance of animal species in the landscape could promote seed dispersal, leading to increased tree reforestation. So they calculated the density of seedlings of woody plants growing under the trees and compared them to that of open spaces. They found significantly higher seedling density and species richness. More than 96 per cent of the total saplings and at least seven out of the 11 species recorded were beneath the trees.

“Fruit-eating birds and bats play a critical role in reforestation. Since they visit fig trees even in areas of high human activity, they can disperse the seeds of other tree species to disturbed areas,” says Trevor Caughlin, lead author. Thus, in human-inhabited areas with little natural vegetation, fig trees may provide a natural nursery, possibly because of higher moisture and shade under the canopies, Caughlin adds. “This is an efficient new technique for reforestation,” he says.

Priya Davidar, professor at the department of ecology and environmental sciences at Pondicherry University, agrees. “The majority of the flowering plants are animal-dispersed, and in tropical landscapes frugivores are important seed dispersers.” But she reasons that since these trees are quite old, there should already be a grove around each. The question is why such vegetation has not been allowed to grow, she adds.