The large-scale clearing of dead and diseased trees is threatening to wipe out bird species that nest in the cavities of these trees. 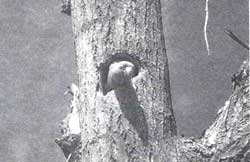 COMMERCIAL felling of trees and forest management techniques are threatening birds that nest in cavities of tree trunks. Such birds prefer diseased, dying or dead trees because it is easier to find or excavate' cavities in such trees. However, forest management requires the removal of all dead and diseased trees for sanitation purposes and indiscriminate felling does not spAlre potential nesting trees, leaving the birds with fewer places to nest.

About 10 per cent of the world's bird species are on the verge of eXtinction, threatened by trapping and tree-felling. In India, 120 species of tree-cavity nesting birds have been identified, but very little information is available about their breed- ing habits. Of the seven Indian duck species that nest in tree cavities, the large whistling teal, the Andaman teal and the white-winged wood duck are listed in Schedule-I of the Wildlife (Protection) Act of 1972, reports Rajasthan forest officer Deep Narayan Pandey in the Wildlife Institute of India Newsletter (Vol 6, No 3-4). Pandey says no more than 15 pairs of white-winged wood ducks can be found in the world, all of them in northeastern India.

The Nicobar parakeet and the Rothschild parakeet, both of which are found in India, have been listed under endangered species in the IUCN/ICBP Red Data B k Pandey says the parakeets, fetc fabulous prices and are ruthlessly trapped for profit.

In India, 15 species of ovals are confirmed tree-cavity breeders. The forest spotted owlet was believed to have become extinct in 1914. However, a photograph published in 1968 raises hopes that the bird may have survived. The nocturnal habits of these birds make them the target of superstitions and they are often hunted to ward off evil spirits.

The white-winged black tit, also under threat, uses the same roost cavity for years. The nuthatch, another species that is dying out, uses clay to r6duce the size of their nest-holes and make them a snug fit so that no other bird will use the same hole.

Pandey suggests a minimum number of potential nesting trees should be left unfelled. He found river-side woodlands to be exceptionally rich in woodpeckers, parakeets, tits and owls. Village sacred groves in central and south India are also full of birds that use tree-cavities as nests, said Pandey. He suggests that such areas be protected. Pandey also found that planting trees favoured by the birds, such as bakain, helped attract both primary and secondary cavity nesters.