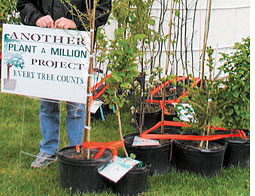 Trees are not very effective as carbon sinks

trees may not be the insurance against global warming we all thought they were. Their ability to store carbon dioxide has diminished due to rise in temperatures and hence they will not be able to act as carbon sinks. Scientists studied two decades of temperature and carbon dioxide data in the northern hemisphere and concluded that the carbon balance is highly sensitive to temperature changes in autumn and spring. They analysed the relationship for forests at latitudes above 20 n. The study contradicts the accepted notion that plants benefit from increased carbon dioxide and global warming as increased photosynthesis and warmer temperatures help growth.

During autumn, when the growing period ends, there is an increase in the atmospheric carbon dioxide levels due to increased respiration.

Earlier studies have established that temperature in the northern hemisphere has risen by 1.1C and 0.8C during spring and autumn in the past two decades. However, the effect of a rising global temperature on the inter-annual variation is poorly understood, the researchers say.

The study shows that the net absorption of carbon is not going up. The researchers found that the higher temperatures had advanced the occurrence of spring and autumn seasons at almost the same rate. A warmer autumn causes trees to respire more, releasing more carbon dioxide than what trees can absorb via photosynthesis. In spring, in spite of warming, photosynthesis is more than respiration. This implies the release of carbon dioxide in autumn nearly offsets the amount absorbed during spring. There is thus no benefit because the idea is to absorb more carbon dioxide than release it. The study was published in the January 3 issue of Nature (Vol 451, No 7174).

"The potentially rapid decline in the future ability of northern terrestrial ecosystems to remove atmospheric carbon dioxide would make its stabilization much harder than currently predicted," says Philippe Ciais, a member of the research team and a scientist from the Global Carbon Project.

John Miller from the University of Colorado, in his review of the paper, says more observation is needed in the tropics and in other poorly monitored regions in oceans and on land.