New studies show large forest areas alone may not be able to counter the effects of increased carbon dioxide in the atmosphere. 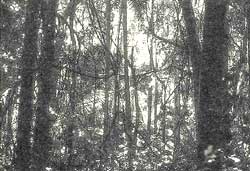 IT IS WIDELY believed that higher carbon dioxide levels in the atmosphere will stimulate plant growth and thus help crops and forests fix more carbon - a positive feedback effort that may partially help control the global warming problem. But two recent studies indicate'forests may not be as efficient in filtering out carbon dioxide as many people think. Researchers at the University of Basel in Switzerland have found that elevated carbon dioxide levels in the atmosphere only lead to a greater "carbon turnover" and not to greater "carbon sequestering" by terrestrial ecosystems like forests (Science, Vol 257, No 5077).

The scientists warn that carbon dioxide fertilisation could promote osses of soil carbon and the release 'of soil nutrients over a period of time. The deleterious levels of starch produced in leaves at the top of canopies under elevated carbon dioxide levels may also cause changes in the structure of plant communities.

Another recent analysis done by Titus D Bekkering of the Netherlands shows national forestry action plans introduced in some countries will fail to counter the effect of greenhouse gases if deforestation is not stopped first (Ambio, Vol 21, No 6). Only a few of the forestry action plans of 13 countries, including Argentina, Bolivia, Tanzania and Indonesia, implemented under the Tropical Forestry Action Plan (TFAP) have formulated strategies to halt deforestation.

The study found that even if reforestation efforts in 11 of the 13 countries are stepped up, the total area reforested -annually would be much smaller than what is needed to have a global impact on carbon dioxide levels in the atmosphere. New plantings would fix about 12.4 million tonnes of carbon annually, compared to more than 282 million tonnes of carbon released every year by the 11 countries.

Bekkering, currently advisor to a social forestry project in northern Pakistan, doubts that the huge costs involved are justifiable simply for the sake of fixing carbon. He says, "Forestry alone will not solve the greenhouse effect."