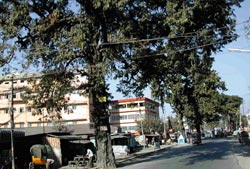 A novel referendum by the Siliguri Municipal Corporation (smc) spelt doom for 122 trees. The civic body asked people to choose between the trees and traffic jams. In the voting, the roads won by a mile.

The corporation prepared a list of the trees and obtained a no-objection certificate from the West Bengal forest department. smc justified its decision to take a vote, citing the need to widen the stretch from Panitanki More to Bypass into a four-lane road. About 3000 people in four wards that will be affected by the decision exercised their franchise. The verdict: 2754 ayes for felling trees to only 322 nays. The project will cost Rs 5 crore and an additio-nal Rs 51 lakh has been sanctioned to shift lamp-posts from their existing positions.

Corporation officials did not seem to mind sacrificing the trees. They said widening the road was necessary due to frequent traffic snarls.Social observers lauded the ballot as a "unique" exercise. The experiment could well be replicated elsewhere in West Bengal to address civic issues, they said. Envi-ronmentalists have not protested against the corporation move either. To compensate for the loss, smc says it will plant 10 trees for each one felled. Environmental group Himalayan Nature and Adventure Foundation indicated it is satisfied with this plan.