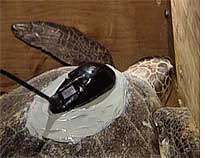 THE Orissa forest department along with the Wildlife Institute of India in Dehradun attached transmitters to seven Olive Ridley turtles this year. Last year, the transmitters were on 30 turtles. This practice is carried out to track the movement of the turtles that come to the Orissa coast to breed and nest between November and March every year. Scientists have for long wondered where the turtles come from and where they go after breeding. Experiments are on since 2001 but the transmitters--comprising a battery and an antenna--have failed to provide clues so far.

Of the 30 turtles fitted with transmitters, called platform terminal transmitters, eight produced signals beyond 90 days, in 2007. But no one seems to know the reason for the loss of signals thereafter. Possible reasons are mortality or technological faults like failure of the antenna, say experts.

"The experiment has been a flop but the mistake is repeated. Millions are spent without providing adequate protection to turtles," said Biswajit Mohanty, Wildlife Society of Orissa's secretary and coordinator, Operation Kachchapa (a turtle conservation programme). He said mechanized fishing was taking a toll on the Olive Ridleys and that almost 7,000 turtles had died since November 2008. Sources in the forest department estimated the number of turtle deaths at 3,000 during the period.

In 2001 four turtles were fitted with transmitters for a satellite telemetry study under a undp -sponsored project. Each transmitter has a unique code. These send high frequency signals, which are received by satellites. First, the transmissions are decoded to identify the transmitter and then its position is determined. The data is downloaded, the latitude and longitude mapped and the place determined. Of the four turtles, one of them confirmed that it had reached Sri Lanka but its journey thereafter could not be tracked. Mohanty said the project lasted only four months since it started in 2001.

After six years, the exercise was undertaken again, this time a Rs 3.5 crore project funded by the Union petroleum ministry. The project came about when the ministry sought clearance from the environment ministry for undertaking oil exploration along the coast. The environment ministry suggested that the petroleum ministry fund the Dehradun-based institute's study because it did not want Ridleys affected by the oil exploration project. The project is expected to complete this year. The results will come out only if the turtles don't get lost in transit.