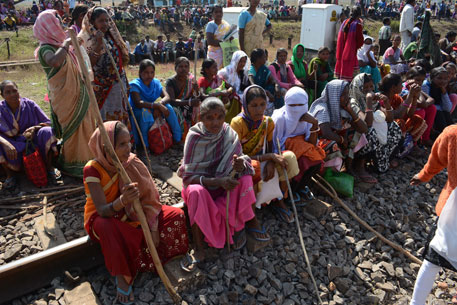 Tribal people blockaded Rourkela city in Odisha for over day to protest the inclusion of some of their villages within the limits of the recently notified Rourkela Municipal Corporation. They lifted the economic blockade after the Sundergarh district collector assured them their demand would be considered.

On Tuesday, these groups had launched an indefinite economic blockade in the third largest city of Odisha, which led to the partial shutdown of the town; train services were disrupted, leading to delays. Police resorted to lathi-charge, detained more than 100 adivasi protestors and arrested 30 of their leaders.

These groups had issued an ultimatum to the state government to roll back its decision to include adivasi-dominated villages under the newly formed Rourkela Municipal Corporation. These groups have opposed formation of municipalities in Scheduled Areas across the country. Scheduled Areas refer to the Fifth and Sixth Schedule of the Constitution that provide separate laws for the tribal-dominated areas, under which rights over natural resources mainly vests with tribal communities. Rourkela was carved out of 12 revenue villages in the early 1940s and later became the district headquarter of Sundergarh, a Fifth Schedule district.

“Samta judgement of the Supreme Court, followed by Panchayat (Extension of Scheduled Areas) or PESA Act, says that not just municipal corporations but also municipalities cannot exist in the Scheduled Areas of the country. By including two gram panchayats and part of one gram-panchayat to turn it from a municipality to a municipal corporation is a violation of PESA,” said Birmitrapur MLA and Samata Kranti Dal (SKD) president George Tirkey, who are spearheading the protests. Tirkey further informed that the Municipalities Extension to Scheduled Areas (MESA), 2001 Bill has been stuck in Rajya Sabha. The Bill aims to protect the land rights of tribals and provides for a standing committee on tribal affairs in each municipality. It has been estimated by a special committee report on MESA Bill that 181 municipalities are functioning in Scheduled Areas unconstitutionally. (See ‘Who dropped MESA’)

A tale of two cities

There is yet another aspect to Rourkela. The city is divided into two separate townships—the Steel City Township, which houses one of India’s biggest steel manufacturing plant, owned by Steel Authority of India Limited (SAIL), and the Civil Township. According to municipal officials, Rourkela Municipality, that excludes the steel township, has a population of around 0.27 million as per 2011 Census of India. For Rourkela to become a municipal corporation, as per rules for Odisha Municipal Act, the city needs a minimum population of 0.3 million. If the Steel City is incorporated in the new Rourkela Municipal Corporation’s limits, the population could go well beyond 450,000. At present, SAIL administers the Steel City Township. Rourkela Municipality executive officer D P Mohapatra said the six villages under two-and-a-half gram-panchayats, including the thickly populated Jagda, Jhirpani, Jalda and Kalunga, has a population of around 71,000. The official said that these villages have been merged with the newly formed Rourkela Municipal Corporation, which was notified end of last year. 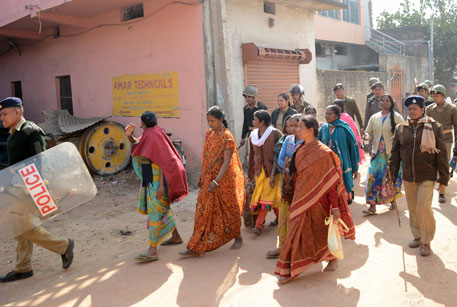 Tirkey’s movement is supported by Communist Party of India (Marxist) MLA Laxman Munda from Bonai, Talsara MLA Prafulla Majhi of Congress, former Congress MLA of Rajgangpur Gregory Minz and former Jharkhand Mukti Morcha MLA of Raghunathpali, Halu Mundari, under the banner of Sundargarh Adivasi Bachao Manch. The leader said that Sundargarh Adivasi Bachao Manch had written to the president and prime minister of India to intervene in the matter. There was no outcome. Earlier, Tirkey had said the government should take a decision to separate the gram-panchayats from corporation limits by January 19, failing which they would stage “economic blockade”.

On January 21, the collector of Sundergarh district called for a meeting after which Tirkey and others called off the economic blockade for now. “For the first time, a host of officials attended the meeting and we have been assured that urban development department of the state would look into this and come up with a solution as soon as possible. However, this is far from over as we are fighting for a constitutional right,” says Tirkey.