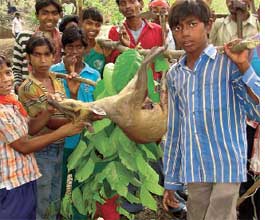 Give forest guards the slip to hunt deer on festival day

heavy barricades and forest guards did not deter tribals of Jharkhand from celebrating their annual hunting festival, Sendra. The festival is an old ritual where tribals from the state and bordering areas of Orissa, Bihar and Bengal, join to hunt in the forests of Dalma hills on the outskirts of Jamshedpur. The tribals offer wild animals and birds as sacrifice to the local deity, Dalma Guru.

The forest guards were deployed on the foothills to prevent the tribals from entering the forests. About 500 tribals armed with bows and arrows, however, managed to sneak in from the rain shadow side that is rocky. The guards were posted on the route leading from the city and did not anticipate the tribals would use the other route. The tribals killed two deer and a crow."It will take time to prevent Sendra but the hunters were fewer this time," said Siddharth Tripathy, divisional forest officer. He said his department may hold a mock Sendra next year to stop hunting.