Tribals in Odisha likely to be severely affected by Hudhud

Many tribals, who earlier used to live in settlements amid big forests, have been made more vulnerable after being relocated by government to lower areas in poor quality houses 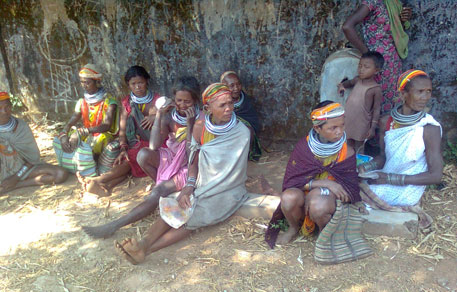 The cyclonic storm Hudhud, set to make its landfall on Sunday, is likely to severely affect the tribals of Malkangiri, Koraput, Rayagada and Ganjam. The evacuation and relocation of these tribals, including Vulnerable Tribal Groups (PVTGs), is a big test for the state government as it will have to deal with people who are reluctant to leave their houses and move to safer places.

Till now, the state government and social organisations have failed to make tribals aware of disaster management work. Such programmes have been held only in coastal pockets of the state, which would make it difficult to evacuate people in the interiors and hilly terrain, says Achut Das, director of Agragamee, a non-profit in the state. Agragamee has been engaged in promoting people-centred, culturally-sensitive and ecologically-balanced sustainable development of remote tribal communities of the state for over two decades.

How tribals protected themselves in the past

“Traditionally, the houses of tribal people used to be made of sun-dried mud bricks, with mud plaster and low roofs.

Small-sized doors and windows facing the north side were other features of eco-friendly architecture. Moreover, the traditional houses were located in deep forest areas where trees would act as natural barriers to protect forest dwellers from cyclonic storm,” says Das. According to him, in the past three decades, the government has displaced many tribals from the deep forests and settled them in low and open areas and provided them houses with asbestos and tin roofs. Therefore, the tribals are now among the groups that are most vulnerable to Hudhud.

He also says many tribals used to thatch their mud-walled houses with a wild grass called teri. But, due to denudation of large tracks of forests, now they are not getting the grass to thatch their houses. Some of poorest tribes live in this part of India.

Many tribal villages on the hills are without roads and facilities like electricity, drinking water and primary health centres.

P K Mohapatra, Special Relief Commissioner of Odisha says, “The state government has directed the district collectors of tribal-dominated districts of Koraput, Malkangiri , Kandhamal, Gajapati, and Ganjam to take special care to shift  the tribal persons,  especially the Particularly Vulnerable Tribal Groups (PVTGs)  to safer places.” Malkangiri district, according to him, is the main focus this time as Hudhud is likely to cross the district on Sunday. “Constant vigil is being maintained over rivers like Bansadhara, Rusikulya and Nagabali as heavy rains are expected in southern districts,” he adds. The Satiguda , Balimela , Machakuna , Kolab,  Indrabati and Chitrakonda reservoirs in Koraput and Malkangiri are also unsafe.

"Our district will face cyclone for the first time on Sunday. About 200 villages, with a population of 30,000, are located around Chitrakonda water reservoir in Malkangiri district; their lives are now in danger," says Sibabrata Das of Malkangiri.

Hundreds of tribals, including Bonda tribals, in the district were moved to shelters on Saturday."I don't want to go anywhere. I'll stay here. If I have to die, I want to die here," says Mitua Sisa, a Bonda tribal girl of Ramliguda village. “We have lived in the jungle and with the jungle for centuries. We can't survive anywhere else,” adds Sisa. Like Mitua, many other tribals are reluctant to leave their houses despite storm alerts.

The Bondas are one of the most primitive tribal groups of Odisha’s 62 tribes. They reside in the mountainous region, located northwest of Machchkund water reservoir, in district of Malkangiri and at a height of 3,000 feet. Last year, many Bondas faced problems due to flash floods in the river as they could not reach the local hat to get essential commodities, adds Shibabrata Das of Malkangiri.