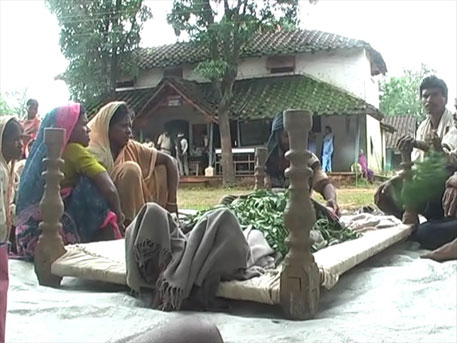 Eviction drive by the forest department officials in Betul district of Madhya Pradesh has backfired. Angry over the death of a villager following brutal beating by forest officials, Gond and Korku tribal people from several villages have started an indefinite protest at the Bijadehi police station in the district. The elderly villager, Bishan Gaur, was arrested during a lathi-charge that ensued after the eviction drive in a reserve forest in the district. On August 11, he succumbed to the injuries sustained during brutal beating in the range forest office where he was held. Villagers are now demanding stringent action against the officials who destroyed a nursery of local fruit trees planted by the gram sabhas and injured many residents of Chuna Hajuri village.

Under the tribal tradition of Hari Jiroti, residents of several villages in tribal-dominated Betul district have been planting local fruit-bearing trees in open lands   around their villages for past several years. In turn, forest department officials, for several years now, have not only been destroying the saplings, but also beating up tribals and slapping false cases against them, says Anurag Modi of the non-profit Shramik Adivasi Sangathan (SAS). “In the last five years, some 50,000 saplings were planted by these people; of these not even five per cent have survived due to the forest department action,” says Modi. “Not only this, over 150 tribals have been implicated in false forest crime cases. Some have even been booked for wildlife crimes, though these cases are nowhere connected with wildlife.”

This year, some 10,000 saplings had been prepared by the residents of Markadhana, Umardoh and Chunahajuri villages, informs Jugar Lal of Chunahajuri, who works with SAS. In late June, while villagers were busy preparing the seedlings for plantations, they were issued a forest department eviction notice. “The notice, dated May 20, was issued under Section 80 A of the Indian Forest Act (IFA, 1927). It referred to an earlier show-cause notice that we had never received and asked the villagers to immediately remove the encroachment.” 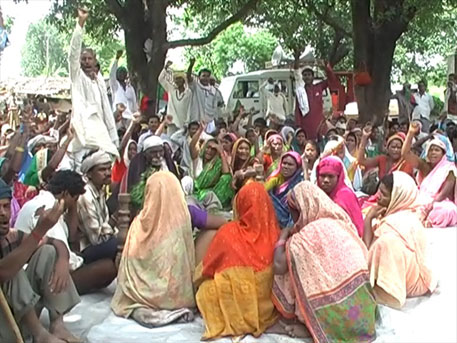 Following this, on June 10, residents of the village, along with members of SAS, submitted a letter to the district collector, the divisional forest officer (DFO) and the local police station asking them to look into the matter. “We had said in the letter that the eviction order was illegal in view of the fact that Section 4 of the Forest Rights Act (FRA) says that encroachments by tribals cannot be removed till their rights have been settled under FRA” says Modi, “We had also argued that under Section 80 A the villagers should have been issued a show cause notice and allowed to state their case before the eviction notice was issued.”

However, on July 28, about 100 police and forest officials descended on Chunahajuri. They uprooted the saplings and beat up the residents, injuring eight people, says Lal. “Bishan Gaur, who had been beaten up brutally, was arrested and taken to the range forest office, where he was beaten up again before being released on bail on July 31.”

Meanwhile, the residents registered a complaint regarding the incident at the special SC/ST police station in Betul on July 29. Since no action was taken against the erring officials despite assurance by the police, the residents of Chunahajuri and nearby villages of Chunakhata and Dhumka started an indefinite protest at the Bijadehi police station on August 10, demanding action against the erring officials, says Lal. Meanwhile, Bishan, who had been complaining of severe pain since his release, succumbed to his injuries on August 11.

On August 14 morning, police officials are reported to have told the agitating villagers that Gaur’s post-mortem report shows heart attack as the cause of death. Protesting villagers have strongly contested this report saying that his body bore injury marks. “Seven others were also injured in the attack,” says Lal, “Administration is obviously tampering with the evidence.”

District collector Rajesh Prasad Mishra told Down To Earth that the encroachment had been removed legally and that no one was beaten up. “The encroachment had not been made by tribals but by outsiders,” says Mishra. “We have the video recording of the encroachment drive, and we can prove that no beatings had taken place.” He, however, refused to comment on why the eviction notice was given to the village if the encroachers were outsiders.

Villagers say that they will not remove their picket till action is taken against erring officials. “We have registered a police complaint and seven injured people who were examined at a government hospital have relevant medical documents to prove that they were injured due to beating.”

Modi says that SAS will take the issue to the court. “The district administration has constituted FRA committees only in forest villages, so that forest dwellers in revenue villages are not able to file their claims under FRA,” he rues. “Meanwhile atrocities against tribals and other forest dwellers are rising in the area.” A grievance redressal committee constituted last year especially for the tribals of Betul and Harda districts has also become non-functional, says Modi.