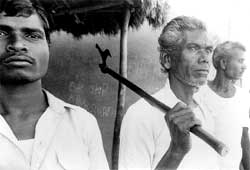 nine tribes of southern Bihar are reportedly facing extinction due to rampant unplanned industrialisation in the Jharkhand region. Gautam S Rana, chairperson, environmental committee of the state legislative council, who has conducted a survey on tribes like the Asur, Birhor, Birijiya, Korwa, Malpahariya and Pahariya, said their populations have declined alarmingly since 1994.

Rana said that the tribals' life expectancy, following rapid industrialisation, has declined sharply on an average, and claimed that there was no person above the age of 45 years among the Pahariyas of Santhal Parganas. In the past 10 years, south Bihar's total tribal population has declined by three per cent.

He alleged that despite the existence of the Tenancy Act, tribal lands were being appropriated to build commercial structures. Already 32,700 tribals have been displaced by the Central Coalfields Limited and the Eastern Coalfields Limited, besides displacement caused by several mining and dam projects, pointed out Rana.