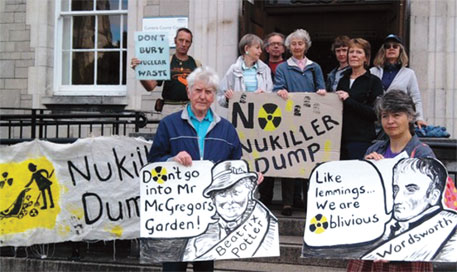 THE United States, the world’s biggest nuclear waste producer, will soon seek approval of its communities to build repositories for disposal of toxic waste in their area.

Implementing the proposal, however, seems difficult because getting approval from communities for disposal sites has been a contentious issue across the globe. So far, no country has managed to build such a repository.

A strategy document released by the US Department of Energy on January 10 states that a protocol will be prepared to seek communities’ consent. ‘Strategy for Management and Disposal of Used Nuclear Fuel and High-Level Radioactive Waste’ says that by 2021, a pilot interim repository will be built to store nuclear waste from across the country. This will be followed by a larger interim repository by 2025 and a permanent underground or geological repository will be in place by 2048.

The pilot repository, says the document, is important to build trust among stakeholders for a consent-based siting process and commitments made with the host community for the facility itself. The pilot will also demonstrate whether the repository would be safe for a few decades or even a couple of centuries. The final repository will have to be safe for up to a million years.

At present, more than 68,000 metric tonnes of heavy metal (MTHM) of used nuclear fuel is stored in the US’ 72 commercial power plants. About 2,000 MTHM gets added to it every year. The US government has majorly defaulted on its 1982 agreement with the nuclear industry where it took the responsibility to manage and dispose of nuclear waste.

Under the deal, power utilities, since 1982, have been paying about $750 million per year to the US Treasury for waste management. But the US government did not fulfil its obligation to manage the waste by 1998, and has accumulated around $1 billion per year in liability cost. The pilot interim repository will fix two problems—remove nuclear waste from power utilities and offload the government’s liability.

But Jack Spencer, nuclear policy analyst with Washington-based think-tank Heritage Foundation, smells a rat. He says by building an interim repository, the US may get rid of immediate problems. However, the strategy certainly delays and possibly prevents building of a permanent repository that the country needs.

The strategy document largely reiterates the recommendations of Blue Ribbon Commission set up by President Barack Obama in 2010 that seeks a plan of action for America’s nuclear waste management and disposal. The commission recommends formation of a body dedicated to implement waste management programme. But the strategy paper is vague in clarifying the status of the body. It says, the body will have “an appropriate balance between independence… and the need for oversight by Congress”. This body will identify repository sites.

Nuclear experts across the globe agree that geological repository, which is built underground, is the safest way to dispose of radioactive waste. “But finding sites has always been politically difficult,” says M V Ramana, member of International Panel on Fissile Materials (IPFM), an independent group of non-proliferation experts from 17 countries. Earlier attempts have mostly met with strong public opposition.

A recent example is Yucca Mountain in Nevada, which was a proposed repository site in 1986. The project was scrapped last year by the government after spending $15 billion. Communities opposed it fearing water contamination. Also, Yucca is a volcanically active mountain.

Communities don’t welcome a radioactive disposal site near them. There are concerns about its effect on water, agriculture and tourism. So far, communities in only Sweden and Finland have consented. But approval of repositories is stuck at the licensing stage.

The Environmental Court of Sweden and the Radiation Safety Authority are reviewing the site for public safety. “The regulator is raising questions on long-term safety of the copper canister and bentonite clay buffer, the technology chosen by KBS, the Swedish nuclear industry body,” says Johan Swahn, head of Swedish non-profit Office for Nuclear Waste Review. The site, close to Sweden’s Forsmark reactor, is on a tectonic fault zone. 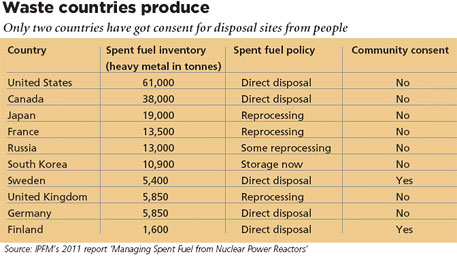 The Swedish and Finnish programmes may collapse like projects in other countries, says Swahn. An IPFM report states that it is still not clear which technology is safe for geological disposal.

Swahn also points out discrepancies in the community consent process in Sweden. “There was better chance for consent as these communities were already living close to the reactors, but the inhabitants were given one-sided information,” he says. Communities were promised jobs during construction of the repository. The company also promised to invest hundreds of millions of Swedish krona in infrastructure and local development projects. It also tried to integrate with local societies by supporting sports events, local teams and cultural activities. “It is such propaganda packages that communities sometimes buy,” says Ramana, who has written The Power of Promise: Examining Nuclear Energy in India.

Communities, he says, generally consent on two conditions—when a poor community is bribed into accepting a repository with job opportunities and compensation; and when communities are living near an operating nuclear facility. In this case, the risk they face is two-pronged. Accidents are likely to occur when nuclear waste is stored on the surface level on reactor sites, as happened in Fukushima. In case of geological repository there is the risk of groundwater contamination. But this happens tens of thousands of years later. Some communities then decide that the latter is lesser of the two evils.

Communities are fighting among themselves in Canada and the UK over the question of allowing repositories.

A plan floated in 1970s of having a repository shared by many countries is still to find takers. Many believe each country has an ethical responsibility to manage its waste. While there is global consensus on speedy geological disposal of spent fuel stockpiled at reactor sites, issues are far too many before it becomes a reality.