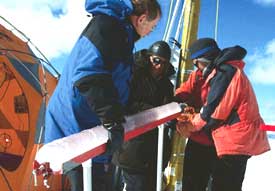 earth's high-altitude glaciers in the tropical regions are in trouble. They might disappear soon, according to the first-ever comparison of climate records between the Himalayan and the Andean glaciers by a team of scientists from four universities in the us .

The scientists analysed ice cores and concluded that glacial retreat is occurring even in those tropical areas where there is increased precipitation. This suggests that rising temperatures and not decreasing precipitation is causing glacial melting. "About 70 per cent of the world's population lives in the tropics. When climate changes there, the impact will be enormous," said Lonnie Thompson of the Ohio State University -- the lead author of the study. The study appeared in the Proceedings of National Academy of Science (Vol 103, No 28, July 11, 2006).

The team compiled chronological climate records for seven remote locations north and south of the equator. It captured a climate history of each region and in some cases furnished annual records and decadal averages by drilling cores into the ice caps and glaciers. The study includes cores taken from the Huascaran and Quelccaya ice caps in Peru; the Sajama ice cap in Bolivia; and the Dunde, Guliya, Puruogangui and Dasuopu glaciers in the Tibetan Plateau.

A chronological measurement of the ratio of two oxygen isotopes (o18 and o 16) was taken to calculate temperatures when the ice was formed. The ratio varies with temperature and this helped the team to provide clear annual temperature records of the cores over 400 years, along with decadal average records dating back to 2,000 years. But what stands out in the records is the indication that how unusually warm the last 50 years have been.

In the course of the study, a dramatic evidence of the emergence of unfossilised wetland plants around the margin of the Quelccaya ice cap was also found. Discovered in 2002, the researchers have since identified 28 sites near the margin of the ice cap where these ancient plants have been exposed. Carbon dating has revealed that the plants range between 5,000 and 6,500 years. "This means that in the last 5,000 years, the climate at the ice cap hasn't been as warm as it is today. Otherwise, the plants would have decayed," said Thompson.

The researchers say a major climate shift around 5,000 years ago in the tropics would have cooled the region since the ice cap quickly expanded and covered the plants. The fact that they are now being exposed indicates that the opposite has occurred -- the region has warmed dramatically, causing the ice cap to quickly melt.