Medicines are for the rich, not for fighting tropical diseases afflicting millions in developing nations. Pharmaceutical companies seem to have but one agenda: greater profits 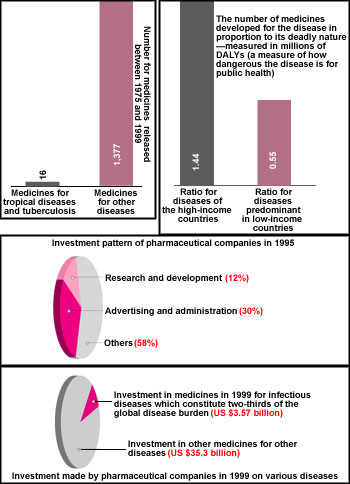 • For non-infectious respiratory diseases (prevalent more in higher income countries) pharmaceutical companies spent US $307 million per one million DALYs - a measure of how dreaded the diseases is. Only US $3 million was spent on tropical diseases in contrast

• All the 13 medicines for tropical diseases, such as malaria, marketed between 1975-1999 were listed on the World Health Organisation's 'Essential Drugs List'. Only two per cent of the the rest 1,393 (essentially 'non-essential drugs') found their way to the list

• According to the US National Institute of Health, taxpayer-funded scientists conducted 55 percent of the research projects that led to the discovery and development of the global top five selling drugs in 1995