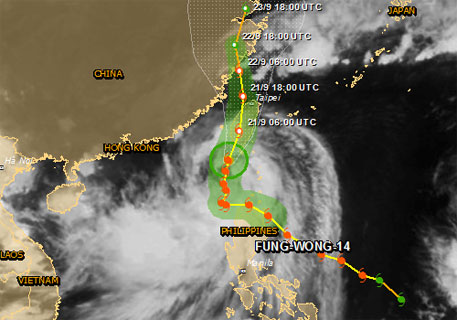 Fung-Wong hit in the northern tip of the country on September 19, travelling at 95 kmph, and headed north to Taiwan, where authorities evacuated about 3,000 people from danger zones.

According to a report published on the website of Chinese news agency Xinhua, Shanghai city, Zhejiang and Fujian provinces are expecting major rainstorms and heavy rain had started in coastal areas of Zhejiang on September 21. “As of 4 pm Sunday, nearly 160,000 million people in coastal cities, including Ningbo, Wenzhou and Taizhou in the province had been evacuated, and 30,000 fishing boats returned to port,” the report said.

Five people have been killed and seven injured in the storm in the Philippines. Around 50,000 troops have been put on standby for rescue operations.

A state of calamity has been declared in parts of the capital and in Cebu City in central Philippines due to floods that have left parts of the city under two meters of water. Trading in the city’s stock exchange was stopped on Friday due to the storm. At least 40 domestic flights and six international flights were grounded by the authorities.