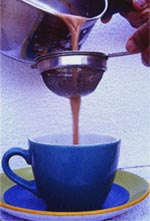 Indian tea could soon be deprived of the lucrative European market by new eu health guidelines. The new regulations -- to be enforced from July 2003 -- ban the use of 320 types of pesticides, insecticides and fertilisers for cultivating vegetables or other agricultural products, including tea. Indian tea growers are known to use several of the banned pesticides, including chlorpyrifos and ethion.

Under the new stipulations, the country's tea growers will have to disclose the pesticides they use to grow crops. The level of permissible pesticides has been set at three milligrammes for a kilogramme of tea. Earlier too, pesticide-rich Indian tea brands had come under the scanner in countries like Germany. Exports were, however, not stopped due to the absence of clear guidelines like the proposed ones. Indian tea has figured in a similar controversy in Japan as well, where consumers mostly prefer organic varieties of the beverage.