Trouble in the air

The winter of 1995-96 has witnessed record lows in the levels of ozone in some areas of the Northern Hemisphere, affecting Europe in particular 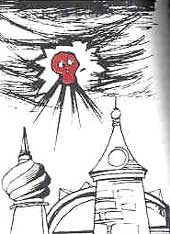 OZONE levels have been depleting at the average annual rate of 4.3 per cent every decade in the Northern Hemisphere, and a slightly lower 4.1 per cent in the Southern Hemisphere, since 1979. These figures were disclosed by Rumen Bojkov of the World Meteorological Organization (wmo) in Geneva, Switzerland. The above observations made by two British ozone-monitoring stations have set alarm bells ringing throughout the Northern Hemisphere. According to the WMO, the winter of 1995-96 has witnessed a significant lowering of ozone, The trend seems to have continued upto the first 10 days of March when the ozone level in the region around the British isles, reached a record low. The monitoring station in the Shetland Islands, UK, recorded a level of 195 clobson units (DO, while further south in Cornwall, it was 206 DL (Global Environmental Change Report, Vol 8, No 6 and No 3).

Substantial lowering was also noticed in the area stretching from Greenland to western Sibei ia_Measured at 10per cembelowthe long-term mean (taken during the period 1957-79, of the months of December, lanuar), and February), this Arctic ozone depletion is a consequence of what scientists felt were anthropogenic emissions (omission of chlorofluorocarbons and other ozone depleting substances (ODS) by humans). With an increase in the amount of sunlight in March, wmci's stations and satellites recorded ozone levels falling 45 per cent below the normal (levels above 300 ix, are considered as being normal). These observations have been made on the basis of studies done over Greenland, the north Atlantic, Scandinavia and the western regions of the Russian Arctic. Monthly mean values have shown a 20-30 per cent-loss in the ozone levels of the area. However, over North America and the North Pacific, the drop in ozone levels was not very significant, and over the Canadian sub-Arctic and eastern Siberia, levels of ozone averaged around the long-term mean average.

When ozone levels dip below 200 DU, the condition generally qualifies as a ozone hole. But according to Bo@kov, this year's depletion does not fit the description of an ozone hole. He justifies this by stating various reasons. Firstly, only three readings below 200 Du have been recorded. Moreover, these levels have not recurred. lie also argues that the time when these low readings were noted, the average ozone level had been 230-250 DU which ruems that the former has not affected the latter to any significant extent. On the other hand, the Antarctic region which has an ozone hole, has reeled under the condition produced due to lower than 200 DLI, for several months. Also, these reduced ozone levels occured over a large portion of the Antarctic, and have lasted for months.

Scientists contend that this unprecedented lowering of ozone has been caused by the extremely low stratosplieric temperatures. The stratosphere is that part of the atmosphere which extends above the troposphere to a height of alhout 50 kin. its lower part his little variation in temperature while in the higher part the temperature increases with height, Such low stratospheric temperatures, lasting over months resulted in the formation of ice clouds and these in the presence of chlorine and other ODS, created ideal conditions tor ozone depletion. As the polar vortex (an anticyclone originating in the poles) this year, is located over the north Atlantic, the worst-affected region was Europe white last year it had been Siberia.

According to Joe Farman of the European Ozone Research Coordinating Unit, at the British F Antarctic Survey (a component unit of the National Environment Research Council) in Cambridge, UK, this year's pattern of depletion lends support to the argument that 'global warming is enhancing the loss of ozone'. According to Farman, "A drop in the temperature of the stratosphere has always been a more robust indicator of climatic change than giound-level temperature variations". This year's lowering of temperature has been recorded only twice before, in the past Five years. "How long do we have to wait, before we accept the need to act faster than we ire it present, to clean up the stiatosphere to the full extent we can," questions Farman.