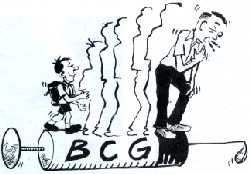 asthma is a chronic and debilitating disease, causing the inflammation of airways, making them contract suddenly and violently. Asthmatics, therefore, get attacks of shortness of breath and wheezing that can sometimes be life threatening. In a potentially lethal overreaction of the immune system, things as harmless as dust, mites or pollen can leave a person gasping for air.

The growing number of asthma cases in countries like India is understandable, as the air pollution levels are quite high. But what surprised doctors is the increased incidence of asthma in the us and Western Europe, where the levels of air pollution and other environ-mental toxins are quite low. A recently published paper provocatively suggests that the increased incidence of asthma in adults is because as children they had fewer serious respiratory illnesses (Science, Vol 275, No 5276).

This joint Japanese- uk study undertaken by Taro Shirakawa, Tadao Entomb, Shin-ichiro Shimazu and Julian M Hopkin proposes that diseases such as tuberculosis and whooping cough may permanently alter the immune system in such a way that a child may get life-time protection against asthma. Thus, children at least in the developed world who are prevented from these diseases through vaccination will be more susceptible to asthma. Thus, the rise in asthma cases, claim the researchers.

An estimated 14 million Americans suffer from asthma. That the present asthma rates in the us are twice as high as they were in 1982, despite the general improvement in the environment, shows the magnitude of the problem.

The study was carried out on 867 Japanese school children, who like the Indian kids received Bacille Calmette-Guerin (bcg) vaccine as a preventive measure against tuberculosis (tb). bcg vaccine is made from an avirulent form of Mycobacterium bovis which is closely related to the tb bacterium - M tuberculosis. The bcg vaccine has been the mainstay for the prevention of tb in India and other developing countries where it is a ruthless killer. It is, however, not commonly used in the us because the vaccine has failed to stimulate the immune system in many recipients. Even in India, in view of the controversy on its efficacy, bcg vaccination is being re-evaluated, although children continue to be given the bcg shots.

Hopkin and her co-workers studied fully vaccinated 12-13 year old children in Wakayama, Japan where there has been a long established tb control programme. Their objective was to see whether these children had developed immune response against tb. These kids were vaccinated twice - once at 6 and then at 12 years of age. In addition, the researchers meticulously collected data on the environmental variables and the medical history of the children and parents as asthma is known to run in families. They found that children who mounted the strongest immune responses against bcg were three times less prone to asthma as compared to those who had weak or no immune response. They conclude that the exposure of these children to tb -related microbes helps them protect against asthma. For this novel interpretation, they offer some logical explanations.

The immune system uses two main arsenals to protect the body against the invading germs. One system centres around antibodies, which when over-produced in the lungs causes asthma. The other system called cell-mediated immunity, centres around the white blood cells called macrophages. This is the system that mainly responds to respiratory infections and bcg vaccinations.

Usually, when one arm of the immune system is operating, the other backs off. Hopkin's team argues that in the absence of severe childhood infections (as the kids are immunised against the major respiratory illnesses) the children do not develop the strong cell-mediated immunity that might permanently temper the antibody arm. In the absence of an early cell-mediated response, the antibody-generating arm of the immune system is left unbridled and poised to overreact to innocuous particles such as dust or pollen.

The study of the immune system of the children showed that the antibody arm was stronger in those with asthma while the cell-mediated immunity appeared to be dominant in those kids with good bcg response. But while the two arms classically oppose each other routinely, no one knows whether early childhood infections can lead to a permanent shift in the balance of immune power.

On the positive side, this study shows that asthma could be prevented in children or treated in adults if they are given a vaccine that mimics the tuberculosis or other severe lung infections. As Hopkin says, immunisation with harmless bacteria related to tuberculosis might be helpful in preventing and treating allergy.

Experts who have seen the study call it interesting, although controversial. The researchers themselves concede that their findings are largely based on science with some speculation thrown in. Many scientists appear to be going along with the findings as this hypothesis makes sense and deserves serious attention. More importantly, there is a serious problem of asthma all over the West and not much is known about the cause.