A severe oil spill in the Russian arctics has bulldozed the environment and created resentment among the local people. As the government reels under its aftermath, the World Bank offers Russia a loan to mop up the spill 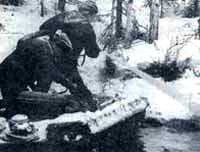 Russia's poor environmental record has come under severe global scrutiny after the Komi oil spill in October, branded third largest in history, and roughly 8 times the volume of the Exxon Valdez spill. Though experts contest the size of the spillage -- ranging from the us Department of Energy's estimate of 270,000 tonnes of oil to the oil company Komineft's figure of 14,000 tonnes, and the Russian environment ministry's 60,000 tonnes.

What is clear ias distilled water is the fact that the Komineft-managed pipeline in Komi was leaking since February this year (see Down To Earth, November 30, 1994). Russia's oil industry has, in fact, long presided over what an expert calls "a disaster waiting to happen". Though the state-owned pipelines have been well maintained, most cash-strapped private companies have given environmental concerns a wide berth.

Ecologist Alexei Yablokov, a member of Russian President Boris Yeltsin's Security Council, has reportedly said that "at least for a decade", an average of 77,000 barrels of oil a year has leaked into the Pechora river. According to Yablokov, given the long years of environmental abuse, the latest spill in the tributaries of the Pechora -- the Usa and the Kolva -- can do "little incremental damage". According to Vladimir Zamoisky of the Socio-Ecological Union, if the chronic leaks were stopped, the tundra ecosystem would still need "as much as 100 years to recover".

So far, the people of the Russian arctic region were fatalistic about the destruction of their environment. An estimated 20.250 million ha of reindeer pasture have been damaged or destroyed by mining and oil drilling, and by repeated oil spills, while the Arctic Ocean has been a regular dumping ground for radioactive wastes. As Chesleva Popova, mayor of the 170 year-old Kolva village says: "There was a very big resource of fish in the Kolva river 10 years ago. But now there are practically no fish left." Whatever is left "smell strongly of oil and it is not pleasant to eat".

However, capitalism has changed the old attitudes of local government officials and townspeople towards environment. Party bosses now realise that globalisation makes it necessary for them to shoulder environmental repsonsibility. Likewise, people from even small towns like Usinsk, located near the Komi oil spill site, are beginning to react against senseless environmental destruction. "The people do think of the future and want to make sure this is not repeated," says Popova.

The immediate challenge confronting the country is tackling the aftermath of this spill. Neither Russia nor the us has much experience of mopping up large spills in the Arctic. Little is known also about the "freeze-and-thaw" effects of oil. According to Alexander Shuvalov, chief spokesman for the Russian environment ministry, damage control operations would continue throughout the freezing winter. The cold, in Shuvalov's words, "will be the saviour of this situation" because, sub-zero temperatures will transform the oil into a thick, immobile sludge which will be easier to clean up than liquid oil.

The official stand complete cleaning by spring, before ice thaws. If this time-bound target fails for any reason, thousands of migratory birds could be endangered. Environmentalists also warn that oil could flow down the Pechora River into the Barents Sea causing more damage.

In early November, the World Bank approved a $ 110 million loan for Russia, for what was described as the first exclusively aimed at environmental clean-up operation. The World Bank president, Lewis Preston specified, the loan was for curbing air and water pollution which were major threats "all across Eastern and Central Europe". These glaring problems sure seem to have landed the already beleaguered Russia on some deadly and slippery grounds.