As the Lok Sabha gears up to vote on the crucial Aquaculture Authority Bill, thousands of fisherfolk launch an indefinite stir 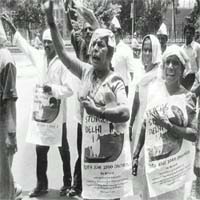 it is a vote that could affect the lives of around 30 million fisherfolk from all over India. When the Parliament meets for the monsoon session, the Lok Sabha will vote on the Aquaculture Authority Bill, which has already been passed by the Rajya Sabha. And for the thousands of people who have been protesting against what they call a draconian Bill, it is a fight for survival.

For over two years, the fisherfolk under the banner of the National Fishworkers' Forum (nff) have been protesting against the Bill saying it would affect their livelihood and harm the fragile coastal ecology. Their protests reached a flashpoint on June12, when 1,000-odd fisherfolk went on an indefinite strike at Rajghat in Delhi. "We are here till the government accepts our demands," said Thomas Kochery, coordinator of the World Fishworker's Forum.

The protesters allege that the Bill has being tabled in the Parliament in a hurry to bypass the landmark judgement of the Supreme Court (sc) in 1996 that declared all aquaculture activities illegal within 1,000 metres of the coastline and also ordered demolition of aquaculture/ shrimp ponds. The apex court's judgement also recognised the rights of traditional fisherfolk in the Coastal Regulatory Zone (crz) and came down heavily on the government for diluting the rules.

With 6,000 km of coastline, India has one of the largest population of fisherfolk, employing around six million people. India's fish exports are worth us $1.2 billion. nff activists say that if the Bill is passed, it will not only have an adverse effect on the environment, but also on the livelihood of local fisherfolk.

The government, however, claims that the Bill is a result of the apex court's ruling. The sc ordered the government to constitute an authority to monitor the implementation of its order and to monitor the aquaculture industry in the ecologically fragile seacoast. The Bill has provision to allow aquaculture in the coast after 'examining the ecology aspect'. "But the Bill is just opposite of what the sc had said. It seeks to legalise the aquaculture industry that not only threatens traditional fisherfolk but also causes damage to the coastal ecology," said Harekrishna Bednath, chairperson of nff. br>
Besides the withdrawal of the Bill, the nff has also demanded the implementation of the Murari Committee recommendations which was set up by the Union government in 1996 to examine the traditional fishing in the coastal area. The 41-member committee has made 22 recommendations. Some of which are to cancel all permits that had been issued for fishing by joint ventures, charted or by lease; all licences/permits for fishing be made public documents; any deep-sea fishing regulations to be enacted only after consultation with the fishing community; all types of marine fisheries to come under one ministry and fisherfolk be given training regarding the handling of modern fishing equipment. br>
The forum feels betrayed by the government move to freeze the implementation of the recommendations of the Murari Committee, which has already been passed by the cabinet. What has alarmed the community is the government's attempt to review the deep-sea fishing policy by setting up an expert group headed by the deputy director general (fisheries) Gopakumar. This, they feel, is an "undercover attempt" by the government to bring in foreign deep sea fishing vessels.

nff is also very angry against, what they call, the "rape and run" approach of multinational corporations (mncs). They allege that the mncs acquire prime agricultural land and convert it into intensive shrimp ponds, which have a maximum life of only five to ten years. Abandoned farms can no longer be used for shrimp or for agriculture. The shrimp then move on to other areas leaving behind people and land devastated, due to salination of land and groundwater and a polluted ecosystem. The forum wants the water pollution, caused by polluting industries on the coastal belt, big harbours and ship-breaking, to be stopped immediately.

The forum is also protesting against the government policy of allowing the import of fish. Such a move will destroy the already fragile economy of the local sector, "kill the entire fishing industry and will displace the fishing community," fears the forum.