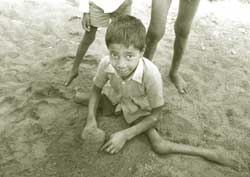 a dose of oral polio vaccine (opv) can relapse and turn into the deadly disease-causing virus, reveals a recent study conducted by researchers from Atlanta-based Centres for Disease Control and Prevention (cdc). The researchers studied a 1999 polio outbreak in Hispaniola, a Caribbean island. The outbreak had killed two children and paralysed a further 19. The researchers analysed genetic sequence of the virus that had affected each of these children. From this they found the origin of the deadly virus. "It came from a single dose of opv given to one child," says Olen Kew, a virologist from cdc.

Normally, genes crucial to polio's virulence are switched off in opv. But during the Hispaniola outbreak, they had switched back, probably through random mutation. "This is hardly surprising because polio virus is one of the most rapidly evolving viruses we know," says Bruce Aylward, leader of the World Health Organisation's polio eradication programme ( www.nature.com , March 20, 2002).

In the samples the researchers also found some genes that didn't belong to polio at all. According to the researchers, the offending virus had borrowed the genetic information from related gut pathogens called enteroviruses. This 'cut and paste' trick may have enabled it to regain strength more quickly than it could by random mutation. "It is a great shortcut," says Mark Pallanch, a member of the cdc team.

Fortunately this kind of reversion can only happen in certain situations, says Pallanch. The situation in Hispaniola, it turns out, was perfect. As many as 20 per cent of children in some parts of Hispaniola had not been fully vaccinated. And wild polio virus, which also imports immunity, had been absent from the island for many years. So there were sufficient children on the island who were susceptible enough to polio to carry and spread the virus. "In Hispaniola the process of reversion was not blocked by a wall of immunity," says Kew. opv passed from child to child, replicating as it went. It reverted to a virulent form in about a year, the researchers estimate.

"The cdc study confirms something we already knew. It demonstrates clearly that the vaccine virus can spread from person to person," says Kew. The fact that opv can revert to a virulent form has been known since its creation. But it became a problem recently. "The study is a warning that you need to have good coverage to prevent vaccines from reverting like this," Kew says. Other experts opine that the study shows how difficult it is to eliminate polio.