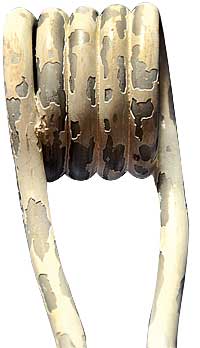 calcium carbonate, a major component of eggshells, shells of snails, reefs as well as writing chalk, has some vexing side-effects. Hard water has a high content of this compound and when used for everyday chores it leaves behind a white incrustation. In other words, it stains cooking vessels, clogs washing machines and lowers the efficiency of heating and cooling devices.

Researchers from the Max Planck Institute of Colloids and Interfaces in Potsdam, Germany, showed that the deposits are formed even in soft water where there is a low concentration of calcium carbonate. Through their studies they found that the process depends not only on concentration of the compound in water but also on the pH of the solution.

The group added calcium chloride to a carbonate buffer solution (a buffer solution ensures a constant pH) and studied the level of available calcium ions in it. There were fewer ions available than what the researchers added. The group proposed that when calcium and carbonate ions come together in a solution, they form stable clusters comprising about 70 calcium and carbonate ions. These clusters or pre-crystals clump together if the concentration of dissolved calcium carbonate is increased and form crystals.

For the next step, the group manipulated the pH of the solution and found that under less alkaline conditions, calcium carbonate forms calcite, its most stable crystalline structure. In a more alkaline environment, it creates vaterite, a non-stable crystalline structure. This suggests that sea organisms like mussels construct their shells or a sea urchin forms its spines by ensuring the right pH at early stages of development. These biomaterials have properties that make them suitable for application in medicine and building technology.

Chemicals called scale inhibitors are used in detergents and household cleaners to stop the white encrustations from coming up. These chemicals react with calcium ions in the solution, preventing the formation of crystals altogether. "Now that we know which factors influence the formation of these crystals it will be possible to develop new types of scale inhibitors that prevent the nanoclusters from joining up to form larger structures," said Helmut Clfen, who led the research.

The researchers found the same process to be applicable to crystallization in other solutions such as that of calcium phosphate, constituent of bones and teeth; and calcium oxalate that make up kidney stones. The findings of the research are published in the December 19 issue of Science (Vol 322, No 5909).