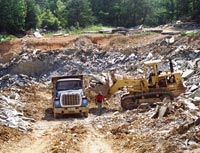 It has come to light that the us government has given away an estimated 1.5 million hectares (ha) of its public lands, often for as little as us $2 per ha, for hardrock mining operations. These tracts were rich in gold, silver and other precious metals and minerals.

After a year's investigation of federal data and records on hardrock mining in the country, activist organisation Environmental Working Group (ewg) has dug up this damning information. Its report gives a detailed account of all those who profited from giving away lands and mineral resources. Ironically, the ewg's findings coincide with the 132nd anniversary of the us' 1872 Mining Law, which continues to authorise those very land transactions that are under scrutiny.

The report also shows that hardrock mining returns very little to the federal treasury. Worse still, since many of the companies are foreign-owned, they pay nothing to the government for the minerals they extract. Moreover, mining interests have left lands and rivers polluted, costing taxpayers billions of dollars in cleanup operations.