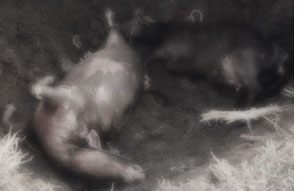 A cow for Rs 89,000, a pig for Rs 12,000 and a goat, Rs 19,000. These are not fictional prices dreamt up by some livestock dealer. These are the prices businessmen have quoted for supplying livestock to Andaman and Nicobar Islands. Thunderstruck, the union territory administration has dropped its cattle-for-cattle scheme to compensate people who had lost their livestock in the 2004 tsunami. It is now considering distributing cash.

Three years after the tragedy, the massive rehabilitation work continues to challenge the Andaman and Nicobar Islands. Soon after the tsunami, the central government sanctioned Rs 13 crore to pay the victims half the cost of their lost livestock and poultry. In August 2006, the Union agriculture ministry revised the scheme and sanctioned Rs 25.7 crore, under which the administration would replace the dead animals.

Tenders were first invited locally but the rates quoted by contractors were higher than the government-approved rates. Tenders were then invited at national level, but all jaws dropped when the rates quoted by suppliers were made public two months ago. Outdoing local suppliers, they asked for prices up to seven times the government rates. As per government-approved rates, a cow should not cost more than Rs 12,000; pig, Rs 4,000 and goat, Rs 3,000. But suppliers know that Andaman is a far-flung archipelago with limited resources and the administration has no option but to accept the lowest bid. Since there are very few genuine suppliers in Andaman and Nicobar Islands, competition is next to nil. Many businessmen from the Andamans became livestock suppliers overnight and quoted high rates, though they justify them.

"You can't blame us. Bringing livestock from mainland India, which is nearly 1,200 km from Port Blair, is not a child's play. Who will pay for the freight and any possible death of livestock?" asks G Anand, a local supplier whose rates were nearly Rs 3,000 more than government rates. Others blame government guidelines for the sky-high rates. The tender states 3,786 cows, 16,623 goats and 38,446 pigs are to be supplied for replacement. "As per the guidelines we need to keep the livestock in Chennai or Kolkata for at least one month under care of veterinary doctors before bringing them and doctors to Port Blair. We will have to bear all this cost," says P Cheku, a businessmen in Andaman and Nicobar Islands.

Disease is another concern. B Mahto, the director of the Animal Husbandry and Veterinary Services, warns that animals brought from the mainland may be afflicted with diseases not known in the islands. "When you bring them in bulk, chances of importing unknown cattle disease are very high, so we need to take all precautions. Guidelines regarding this have been issued in the tender," he adds.

What do people prefer, cash or cattle? Grassroots leaders and those who have lost their cattle in the tsunami allege that the administration did not hear them out on the issue. "We have been demanding distributing cash against loss of livestock since the beginning. Moreover, tsunami-affected families do not have place to keep livestock," says P Halder, a grassroots leader.

Almost 98 per cent of the affected are still living in temporary shelters. "We do not have enough room for our family in these one-room, tinned shelters. If we are given livestock, where will we keep them?" asks Ananda Roy of Chouldari village in South Andaman.

Even some officials of the Andaman administration believe that giving money for the loss of animals is a better option. Says Mahto: "This will not only save the government money, but also be best for those waiting for compensation. " The administration, he adds, has finally decided in favour of cash compensation, but is yet to recommend this to the agriculture ministry.

While the administration wavers, the wait for compensation gets longer.