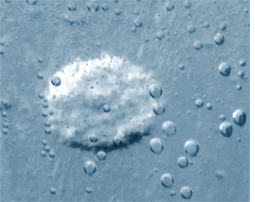 addition of natural compounds to tablets may aid in their dissolving faster. Mucilage from seeds of a tulsi variety, Ocimum americanum , can substitute synthetic disintegrants such as lactose, sodium starch glycolate and polyvinyl pyrrolidone--substances used to bind a tablet's components.

Patel says there could be another advantage as well. It was found that the study, which was carried on analgesic (pain-relieving) drugs, reduced the medicines' side effects. "Analgesic medicine may cause ulceration in the stomach. Ocimum americanum, which has cooling properties could remove this effect," he says.

Different techniques were tested to separate the mucilage from the seeds of the tulsi variety (called takmaria in Gujarat). Around 14 grammes of mucilage was extracted from 100 grammes of takmaria seeds through a complex distilling and sieving process. The mucilage was evaluated as a disintegrant in tablets in various concentrations. The disintegrating efficiency of separated mucilage was then compared with other disintegrants such as starch, lactose and polyvinyl pyrrolidone. The researchers are now studying the commercial viability of the product.