Tuna catch falling in the Philippines 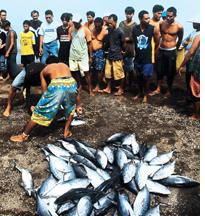 Tuna canneries in Mindanao, the Philippines, have cut production by two-thirds due to a global drop in tuna catch. Local fisherfolk say that the yield in July and August was the lowest in the past 20 years.

Tuna landings in the Philippines have reduced drastically since 2005. In 2004, Food and Agriculture Organization (fao) data shows, tuna landings in the archipelago were at 241,915 tonnes, which dropped to 4,524 tonnes within a year. Global data also shows a sharp fall in tuna landing between 2004 and 2005.

Various explanations have been put forth for the decline, from overfishing to changes in the tuna's migration pattern due to the 2004 tsunami. Environmentalists warn that the tuna could face extinction if fishing continues at the current rate.

The consensus among organizations involved in monitoring the fisheries industry, such as fao and the International Commission for Conservation of Atlantic Tuna, is that the tuna has been overfished for a while now and the stocks may collapse anytime. It is difficult to get accurate data on fish landings because of under-reported and unreported catches.

Low tuna stocks have also prompted the European Commission to ban the fishing of endangered bluefin tuna for this year in the eastern Atlantic and Mediterranean Sea. The commission said seven European Union (eu) countries--Cyprus, France, Greece, Italy, Malta, Portugal and Spain--had exhausted the eu's annual fishing quota for the bluefin tuna, 16,780 tonnes, but added that the countries have not submitted reports of catches to it. Though France and Italy closed their own fisheries in July and August, the commission said, they could have taken more than their share of this season's quota. Under eu agreements, member countries must submit catch reports to the eu every five days for all fishing vessels working in the tuna fishery. The commission is contemplating taking the countries to court for failing to report how much endangered Mediterranean tuna they caught this year.

The commission's move follows its recent study that revealed that Europe's fishing policy is "poor", with its waters among the most overfished and the industry among the least profitable in the world.

About 80 per cent of eu stocks are overfished, compared with 25 per cent worldwide. On the contrary, the average profit of the eu fishing fleet was about 6.5 per cent compared with about 40 per cent in New Zealand, says the commission's report. It also says that overcapacity and failure to resist special interests have left fish stocks in many areas on the brink of collapse.