Indore banks solely on rainwater harvesting, lands in a hole 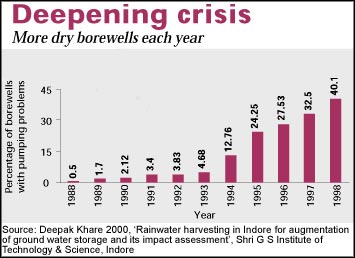 The onset of summer saw 27 borewells in Madhya Pradesh's Indore city dry up. On the face of it, the development is baffling because Indore is considered one of the pioneers of rainwater harvesting (rwh). Not only was it among the first places to adopt the system on a wide scale, it also introduced various innovations and incentives to ensure its success. Now, with the city's water table depleting alarmingly, the question being raised is: does rwh really recharge aquifers? The answer, of course, is yes. But the experience of Indore underscores the fact that rwh should be complemented by other water management practices.

According to the Indore Municipal Corporation (imc) and Central Ground Water Board (cgwb), while there are around 1,000 rwh structures in Delhi, their number in Indore is about 3,000. Yet the latter's groundwater level has dipped by 4 metres in the past 20 years, points out a cgwb study. Consequently, several borewells are rendered redundant every year. "Though efforts to promote rwh began in 1999, the city did not have a good monsoon until 2003. This is also a reason for the drying up of borewells," reveals V N Shroff, advisor, Rajiv Gandhi Watershed Management Mission. Besides, Indore has emerged as the commercial capital of the state, leading to increased exploitation of surface and groundwater.
Narmada river, sited 70 kilometres from Indore, is the main source of water for the urban areas of Indore. The Yashwant Sagar lake and the Bilawali tank also supply some amount of water. In order to carry the Narmada's water to Indore, a Rs 500-crore pipewater project was undertaken sometime ago. The first of the three phases of this project was completed in 1978. But the venture is not proving cost-effective. "The municipality earns Rs 10 crore, but spends Rs 33 crore. Also, the imc sells water at a subsidised rate. After the Narmada phase-3 interim project is commissioned, the annual running and maintenance expenditure may increase to Rs 90 crore," points out V K Jain, chairperson, Madhya Pradesh State Pollution Control and Prevention Board.

Moreover, the river currently provides only 150 million litres per day (mld) of water to Indore -- much less than its requirement of 320 mld. The situation worsens during summer, when the Narmada water does not reach the city due to an acute shortage of power. Groundwater is exploited to bridge the gap between demand and supply of water, which has been widening every year. The stress on aquifers has led to a sharp increase in the number of dry borewells, states a study conducted by Deepak Khare of Shri G S Institute of Technology & Science, Indore (see graph: Deepening crisis).

The quality of groundwater has been deteriorating as well. Laboratory tests conducted at the Indore-based Choitram Hospital & Research Centre show that water from 75 per cent borewells contains high amounts of faecal contamination. Mansoor Ali Haidry, a local environmental consultant, points out that empty aquifers are contaminated by untreated wastewater released into the Khan river, on whose banks Indore is situated. The river has now been reduced to a sewage drain.
The imc used rwh as its main tool to fight depleting groundwater levels. It constituted a separate department for water harvesting and recharging. While notifications were being issued in other parts of the country for making rwh mandatory, the imc went ahead and introduced incentives for doing so. It conducted household surveys, too, to verify implementation. In addition, an information centre was opened to divulge data on the technical aspects of rwh. "Water harvesting systems were set up at a cost of Rs 181 lakh. Innovative techniques like pile, tubewell recharging, and pit and trenches methods were adopted," says N K Surana, city engineer, imc. " rwh was made mandatory in Indore in 2000," he adds.

The Dewas system of recharging borewells, in which rooftop water is made to pass through a filter system before being stored in borewells, was used extensively. V N Shroff also developed a funnel technology in which rainwater is filtered and diverted to borewells. "Out of the 30,000 borewells in Indore, 20,000 are equipped with rwh systems," he discloses. But the gains were marginal. Rakesh Shroff, engineer in charge, rainwater harvesting information cell, says while borewells dried up in January earlier, they now function up to March."

Rakesh Trivedi, director, Centre for Environment Protection, Indore, a citizen's group, feels that the current stress on freshwater sources can be avoided if Indore's wastewater is also treated and reused. This should serve as a lesson for other places in the country too.