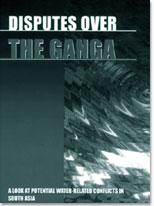 Disputes Over the Ganga A look at potential Water Related Conflicts in South Asia by Panos South Asia, Kathmandu 2004

More than 60 years back, David Lilienthal -- the policy-maker known for directing operations that led to the construction of twelve dams in the Tennessee river valley, usa -- famously remarked, "A river has no politics." It was almost like asking people to have no politics. In his haste to propagate the hold of the Tennessee River Authority, Lilienthal had glossed over the fact that people have numerous uses for rivers. But perceptions such as his persist even today. The book under review brings this out cogently.

The collection, brought out by the Kathmandu-based Panos Institute, highlights a sorry paradox: people live in abject poverty around the Ganga basin even though the area abounds in natural resources. Disputes Over The Ganga also comes at an opportune time: the Indian government is going full steam with inter-linking rivers. The book shows how badly grounded the move is. For example, the government's contention that the Ganga has surplus waters is shown to be way off mark. Dinesh Kumar Mishra shows the fallacy of the oft-repeated argument that Bihar has surplus waters because it is flood-prone. Mishra uses government records to show that the flood-prone Khagaria region in the state had, in fact, drought in seven years between 1966-1987.


The river linking plans are also no good when it comes to relations with our neighbours. The government does claim that the Indo-Bangladesh accord of 1996 has resolved matters relating to the exact definition of the Gangetic basin (whether Ganga constitutes a basin or the river should be seen as part of a continuum that includes the Brahmaputra or Meghna rivers), but New Delhi's intentions are suspected in Bangladesh even now -- river linking plans only aggravate bitterness. The Indian government's reticence to share data on flood forecasting has only compounded matters -- as Mustafa Kamal Majumder shows in the chapter on Bangladesh.

Chapters by Bidisha Malik and Jayanta Bandyopadhyay warn that a crisis at the Farakka barrage (in West Bengal) is imminent. They warn that the meandering river is likely to make the barrage redundant and bypass it at more than one location. At the meeting to launch the book, Bandyopadhyay argued that hydro-engineers in India have not faced open scientific scrutiny of their projects, so they continue to make costly mistakes even as their salaries go up -- and the economy of the basin goes down.

The book could have done with a more extensive discussion on management of transboundary rivers such as the Ganga. Ajay Dixit, Pradeep Adhikari and RR Thapa do note in the chapter on Nepal that, "The World Commission of Dams report, Dams and Development, introduces a new dimension to water governance, which is relevant to countries of the Ganga basin". But the contributors would have done better to have referred more extensively to the unique exercise that led to this seminal report. One of the seven priorities enunciated by that document is "sharing rivers for peace, development and security". But as Dixit, Adhikari and Thapa note, "Most so-called agreements in the Ganga basin are about mega-projects than about actual problem solving and making a difference in people's lives."


The collection also sheds little light on the disputes between the State and people in the Gangetic basin. It ignores that chances of such conflict have become rife with numerous hydro-engineering projects coming up on the basin. One hopes that when Panos revisits this area in future (as it has been doing over the last two years) it would give more importance to this issue.

The volume contains many maps, but this reviewer feels that it would have benefited with a map of important water resource structures of the basin. Besides, the book betrays signs of being hurriedly put together. For example, the table on sources of Delhi's water supply, on page 147, is incomplete: it does not mention the contribution of Bhakra to Delhi's water supply. Notwithstanding all this, Disputes Over The Ganga merits attention. That it has a Hindi, Nepalese and Bengali edition is all the more laudable.

Himanshu Thakkar is with the New Delhi-based, South Asia Network on Dams, Rivers and People