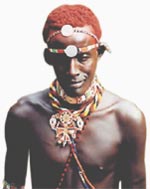 Members of Kenya's famous Maasai tribe are on a collision course with the government over lions that have been straying into grazing area owned by them and taking a heavy toll on their livestock. The tribals have already killed 10 lions and are threatening to wipe out the remaining nine from the Nairobi National Park. It may be noted that hunting of game has been banned in Kenya since the late 1970s.

The Maasai have warned the authorities that the big cats will be killed the moment they try to prey upon the cattle. For the tribespersons, hunting a lion is an act that signifies bravery.

The Kenyan government is worried. "We have directed security agents to hunt down and lock up all Maasai moran (warriors) threatening to kill lions," revealed Kenyan minister for environment, natural resources and wildlife, Newton Kulundu. "The country can ill-afford the situation created by the morans ," added Kulundu.

The Kenya Wildlife Service, along with local non-governmental organisation (ngo) Friends of the Nairobi National Park, has declared that it will construct two fenced areas within the park as a damage control measure. The cost of the same will be around us $2,340.