Turmoil in the Earth's guts 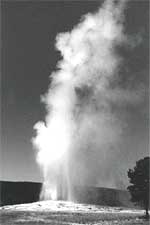 it is fascinating to find colourful hot springs and boiling mud ponds in Yellowstone national park, Wyoming, usa. However, there are several mind-boggling facts that people do not know. Nearly seven kilometres (km) beneath the park's surface, there are gigantic globs of partly melted rock and pressurised gas. This may extend to the Earth's liquid core and any time come out to the surface.

Even geologists took a long time to accept these facts. Nancy Hinman, geologist at the University of Montana in Missoula, usa , says that scientists have accepted that Yellowstone is a geological hot spot, where deep forces push violently through the Earth's crust to the surface.

It is known that most hot spots are present under oceans. Hinman says that these give birth to island chains such as the Hawaiian islands. However, in Wyoming, a hot spot has formed the Yellowstone caldera, a crater like basin of a volcano, measuring 80 km across.

The last time the volcano blew up was nearly 600,000 years ago. After the blast, ash landed in Iowa and California, making Mount St Helens look like a hillock.

Now, geologists believe that caldera is still active. The fumes coming out of caldera kill plants and wildlife, and alter terrain. Scientists feel that the caldera may again erupt. They term the caldera a natural laboratory, which provides valuable information about the Earth's composition.

European researchers had first explored Yellowstone in the early 1800s. However, only 25 years ago, geologists could realise that it was built on a hot spot under the North American plate. Another plate was moving over it at 2.54 centimetres a year, according to Kenneth Pierce, a geologist at the us Geological Survey, Denver.

When they studied the Snake River Valley that stretches from Yellowstone west, they identified a string of extinct calderas. According to Pierce, about nine Yellowstone-like calderas running from Wyoming to Oregon have been found so far. The oldest is 16 million to 17 million years old, which lies in southeastern Oregon and northern Neveda.

Yellowstone, as it exists today, is less than two million years old. It was formed by three eruptions, one of which may have been the largest eruption in the planet's history, says Robert Christiansen of the Geological Survey in Menlo Park, California, usa .