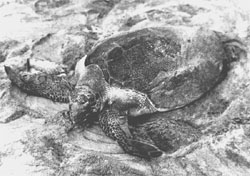 the Orissa coast, between Paradip and Jatadhar has been littered with thousands of dead Olive Ridley sea turtles. Dead turtles have also been found on the stretch between Harishpur and Devi river mouth, said Biswajit Mohanty, project coordinator of Operation Kachhapa, a conservation programme launched to save the turtles.

Mohanty says that the turtles arrived in December 2000. Soon reports of deaths poured in from all over. By December 25, 2000, observers of Operation Kachhapa had counted 659 dead turtles between Paradeep and Kadua. Unless the state heavy government takes immediate enforcement steps, it is feared that the death count may increase in the next few months.

At Jatadhar river mouth, the observers were shocked to note the gruesome sight of two live sea turtles on the beach bleeding from severe injuries. Both of them were severely injured and one of them had her carapace (shell on the back) broken.

The head of another turtle was bleeding from an injury and her two rear flippers were also chopped off. These injuries have been inflicted with sharp axes and knives when these turtles were caught in the trawlers' nets.