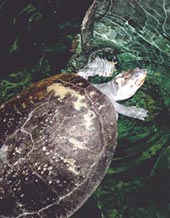 South America's largest freshwater turtle, the Arrau, is facing extinction. To ensure survival of the species, Venezuelan activists have resorted to raising hatchlings in captivity before liberating them in the wild.

The numbers of the Arrau turtle (Podocnemis expansa) have been facing a steep decline as they have been hounded for their meat and eggs by the people living along Orinoco river in Venezuela. In the local market, turtles retail at about US $100 each, despite the species gaining legal protection in the 1960s.

German naturalist Alexander von Humboldt had estimated in the 19th century that there were about 300,000 adult female turtles. Today, only around 1,000 female adults are known to lay their eggs in the areas around Orinoco.