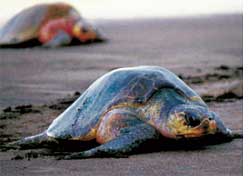 Concern over the survival of Olive Ridleys persist

WHEN the Olive Ridley turtles did not turn up on the islands off Gahirmatha beach in Orissa last year for mass nesting, the Dhamra port under construction less than 15 km away, was blamed. The turtles were back in droves this March and jostled to find suitable nesting ground.

Preliminary estimates of the forest department said about 100,000 turtles nested on the beaches of Nasi 1 and Nasi 2 islands between March 24 and 30. "The turtles came ashore for nesting in groups of 5,000 to 10,000 each," said C S Kar, senior scientist with wildlife wing of Orissa Forest Department.

The endangered turtles may have returned to nest but concern about their survival persists. Biswajit Mohanty, secretary of the non-profit, Wildlife Society of Orissa, said, "The coastline along the nesting habitat has reduced in the past one year from 1km to 700 metres. The jostle for space among the turtles may destroy the eggs." The mass nesting--arribada--takes place every year between December and March. Gahirmatha in Kendrapada district is said to be the largest nesting ground for the turtles. The eggs usually take 45-50 days to hatch. The hatchlings make their way to the ocean as soon as they emerge from the eggs. The turtles have missed arribada on five previous occasions between 1981-82 and 2001-02, for reasons not known.

Port officials said the return of the turtles belies claims of a few environmentalists that dredging at Dhamra port site is a threat to the Olive Ridley turtles. The port is being constructed jointly by tata Steel and Larsen and Toubro. It is 30 per cent complete.

But conservationists said the port construction is eroding the shoreline and changing it. This will permanently damage the turtle habitat, they said while adding such issues were ignored while preparing the environmental impact assessment and the port's environment management plan (see 'Conservationists divided over Dhamra port', Down To Earth, May 30, 2008). Once the port is operational, lighting and possible oil spills will further endanger the Olive ridleys, they added.

A port official, who did not want to be named, said the port could not be blamed for loss of turtle habitat. The National Institute of Oceanography, in an unreleased study, found beaches in the region get eroded but then recover through sedimentation, he said. Mohanty said this was not true as the eroded beaches have been lost permanently and show no sign of recovery.

Port officials said a mitigation plan suggested by the International Union for Conservation of Nature will take care of all environmental concerns.