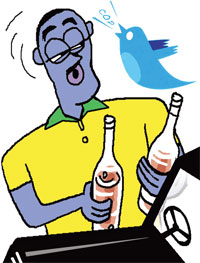 The microblogging site Twitter has become the setting for a battle of wits between the police and residents of Rio de Janeiro evading a drunk-driving campaign, Operation Lei Seca.

Anyone who has had too many beers but wants to drive home can turn to a page on Twitter where citizens who have seen the distinctive branded police vans, warn others which routes to avoid.

Traffic police are logging on to foil such efforts, often parking in unexpected locations. “The Twitter page is undermining our strategy and good sense of the campaign,” said Jose Gomes, Brazil’s former health minister. For some, Lei Seca is an interference from authorities.

Twitter user Marcelo said the check was not just a way to drink and drive without fear of reprisal. “Lei Seca is good. At times I check Twitter on my Blackberry when I have forgotten my licence. It’s just better to drive without worrying about anything.”